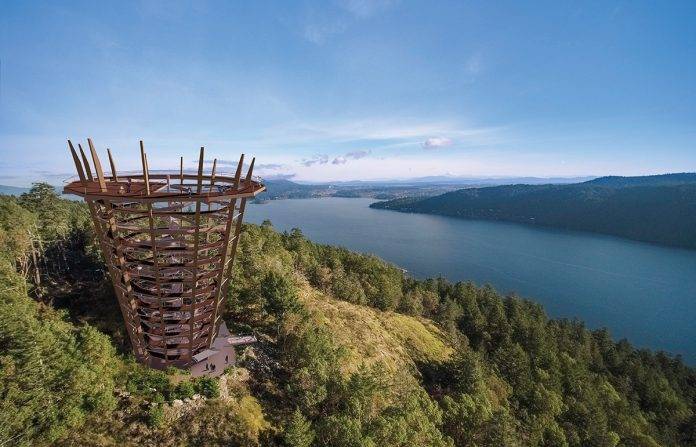 Finlayson Arm — you know it’s there but it’s hard to see. But a change in land ownership of an 168-acre parcel, sold by a private developer to the B.C. government on behalf of the Malahat Nation, has led to the creation of a tourism project that could see the construction of a 40-metre wooden tower at the Malahat summit.

Visitors to the Skywalk would travel along a 600-metre elevated walkway, through Arbutus and second-growth Douglas fir trees to the tower. A café and retail centre are also planned. The project is being designed by David Greenfield and Trevor Dunn of A. Spire by Nature, the team behind the Sea to Sky Gondola in Squamish, which had a massive impact on that region’s economic development.

Part of A. Spire’s business evaluation focused on tourism numbers at Goldstream Park, which captures 600,000 visitors a year, and Butchart Gardens, which sees over a million tourists annually. “I can guarantee this will be successful,” says Greenfield, who says he has known about the land and its potential for years.

“We truly want this project to be a tourism facility that will have positive impacts on retail and local hotels and things of that nature so that everybody prospers and benefits from it.”

Greenfield says tickets to the Skywalk experience will be between $20 and $30, with special rates for seniors, students and children. He expects construction to begin in the fall of 2019, with completion in June 2020.