The Good Ocean collective wants to change the way the world does business. The founding team of 10 small-to-medium-sized companies from across the globe are teaming up in the hopes of promoting sustainable business practices.

“It’s really about disrupting the way that consumers consume, and the way businesses produce,” says Danielle Smith, Administrative Manager at Sheringham Distillery, one of two Vancouver Island businesses on the founding team.

Sheringham Distillery and Goldilocks Goods were looking for a place to not only donate but to help effect real change. Their search led them to SeaLegacy, a non-profit founded by photographers, filmmakers and storytellers striving to create healthy oceans.

SeaLegacy receives daily offers to collaborate from companies like Sheringham and Goldilocks but they didn’t have a structure to engage with that community. The Good Ocean was created as a way to bring these organizations together to share ideas. Each founding member of The Good Ocean collective is required to contribute a minimum annual donation, as well as commit to sustainable supply chain practices and ethical employment practices such as fair-trade.

“We saw that we could create something impactful and unique through collaboration and a common desire to lead by example,” says Kait Burgan, Relationships Manager at SeaLegacy. Burgan hopes that the collective will show consumers that they have choices and inspire business leaders to take action.

Sheringham was attracted to SeaLegacy because of their own ocean connection; the distillery began as a single still overlooking the Juan de Fuca Strait and their flagship Seaside gin is flavoured with sustainably harvested winged kelp.

“We wanted to align with a company that was moving the needle,” says Smith. “Where they’re not going in with that colonial capitalist angle where it’s just a bunch of white North American people going ‘Okay, everybody, we’re here to clean up your act’. They were sensitive to the areas that they were going into, and the culture. There was a focus on women-led activities.”

The appeal of SeaLegacy goes beyond their marine focus. Hall wanted to have an impact not only at the individual consumer level but with policy and government as well.

“It’s such a perfect balance,” says Hall. “By aligning ourselves with them and supporting their work, we’re able to kind of go from top-down as well as bottom-up.”

“We believe that small to medium-sized businesses are uniquely positioned to create change, fast,” says Burgan. “They have an opportunity to disrupt the retail industry, taking tangible steps towards systemic change.”

Hall and Smith agree that there is power in small businesses.

“It’s a lot easier to work outside of the system,” says Smith, who’s hoping that by aligning with other companies equally committed to sustainability, they’ll be able to show other businesses that there are alternatives to the way things have always been done. Ways that don’t create waste, or destroy ecosystems, or rely on inhumane labour practices. “There’s a false economy behind products. You might not be paying for it, but somebody else is.”

Though the collective currently consists of only 10 businesses there are plans to grow it in the future, once the founders have determined the best way to do so.

“It’s not about exclusivity, but about accountability,” says Smith. The Good Ocean members want to ensure that anyone joining the team is serious about changing how the industry works, not just looking for a label to stick on their product.

“There’s no greenwashing going on,” says Hall. “These are genuinely people that are interested in changing their business.”

Both Hall and Smith say the benefits have already been numerous: whether decreasing material costs by adding scale, sharing a resource for non-toxic inks, or even just knowing they’re not in it alone.

“I think working in a zero-waste industry can be daunting at times, where you feel like it’s this ongoing uphill battle,” says Hall.

The Good Ocean creates a space for small businesses to solve those problems together.

“A lot of what we’ve learned is how much easier it is than we would have ever thought to put these practices in place,” says Smith, “Especially when you have input from other companies.”

Interim board announced for COAST ocean hub in Victoria BC 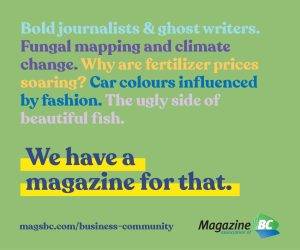 Dancing in the Dark – planning for a future you can’t...