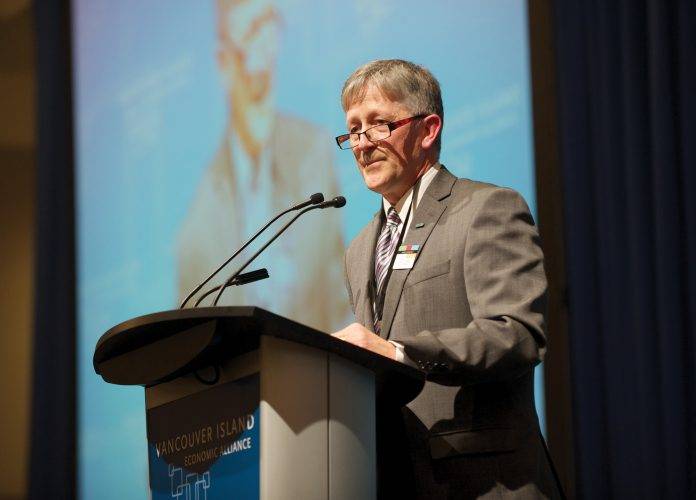 The State of the Island Economic Summit is fast approaching on October 28 and 29 in Nanaimo. Now in its ninth year, the State of the Island Economic Summit, an initiative of the Vancouver Island Economic Alliance (VIEA), has emerged as the business networking event on Vancouver Island, featuring a business-to-business trade show that offers delegates a concentrated networking opportunity with qualified prospects, and panels and sessions that specifically addresses topics that are important to economic vitality.
The agenda this year includes sessions on business financing and fundraising, intermodal transportation, labour-force strategies, First Nations aquaculture, entrepreneurs’ success strategies, land-use planning, manufacturing for export, social innovation in business and more.
At this year’s Summit, VIEA will release a State of the Island Economic Report at the Summit Dinner on October 28. This project is possible because of the initiative and sponsorship of MNP and by additional sponsorship from the Nanaimo Airport, Coastal Community Credit Union, BC Ferries, BC Hydro, and the BC Ministry of Jobs, Tourism and Skills Training.
“We think the report will quickly become a go-to resource for anyone doing business and considering doing business on Vancouver Island,” says James Byrne, MNP’s regional managing partner for Vancouver Island
Summit Keynote Speakers 2015

The keynote speakers for this year’s Economic Summit are:

Peng-Sang Cau, CEO of Transformix  Engineering Inc., a Kingston-based Canadian supplier of high-speed Continuous Motion machines for factory automation. She is also an outspoken advocate for Canadian manufacturing. Peng and her family came to Canada from Pol Pot’s Cambodia as refugees in 1980. She founded Transformix in 1995. Peng has been inducted into the Kingston Chamber Business of Hall of Fame and was Kingston Business Woman of the year in 2012.

Susan Mowbray is an economist with extensive experience in modelling, research and data analysis. She is Manager, Economics and Research at MNP. Her experience encompasses a variety of industries including healthcare, aviation, post secondary education, non-profit, government and tourism. Mowbray is consulting lead on the landmark State of the Island Economic Report to be released at this year’s Summit.
The Company You Keep
The Vancouver Island Economic Alliance (VIEA) is all about the company you keep. When you’re in good company, you can accomplish great things, and VIEA members find themselves in the company of business, government and community leaders, all of them dedicated to the economic health and vitality of Vancouver Island.
VIEA is the only independent organization with an over-arching approach to economic interests across Vancouver Island. VIEA provides opportunities for communities, First Nations, businesses and other key stakeholders to collaborate on broad-based economic development programs to improve the region’s overall capacity for economic vitality. This regional alliance embraces all of Vancouver Island from Victoria to Port Hardy, as well as the Northern and Southern Gulf Islands.
As a small organization with an ambitious mandate, VIEA was established in 2006 with seed money from the provincial government and a task, simply put, to promote Vancouver Island. VIEA is a registered non-government, non-profit society funded by memberships, sponsorships and gate receipts from public events. Membership is open to anyone.
VIEA’s main goals are to:

Bringing Key Players to the Table
VIEA is all about collaboration. “We know that when all of the players are invited to the table, and smart choices are brought forward into the right conversations, more ideas will be explored and the best solutions will be found,” says VIEA president George Hanson.
“Across the Island, we seek expertise, we lead and join initiatives and we address issues with the most informed voices and willing hands at the table. Whether you’re involved in government, business, First Nations, institutions, non-profits or professional associations, there is an issue and conversation in need of your voice.”
Hanson says VIEA is involved in projects that build cooperation, provide research data, coordinate efforts to promote the Island to investors and assemble stakeholders to explore solutions to nagging problems. For instance, this year, VIEA hosted the Island Transportation Forum, which brought stakeholders together from across Vancouver Island to discuss issues and share solutions for how to best move people and goods both to and around Vancouver Island.
VIEA is meeting with forest industry stakeholders to explore challenges and opportunities to grow the value-added forest products sector on the Island. The meetings are built around presentations outlining opportunities for innovative wood products and markets. VIEA is also partnering with Raven Events and the Nuu-chah-nulth Economic Development Corporation to present the first-ever Aboriginal Business Match event on Vancouver Island, from February 1 to 3, 2016.
Whether it’s working with professional associations to ensure contract and employment opportunities in major projects for Island companies and people, helping facilitate fibre-optic connections for north Island communities, partnering with economic development corporations to help local businesses access sophisticated global marketing data, or hosting stakeholder sessions on topics such as immigration and transportation, VIEA is a meeting place for people interested in fostering a vital, sustainable Island economy.
Get Summit-Ready
Join more than 600 attendees at this year’s State of the Island Economic Summit for exceptional networking, exciting and informative keynotes and valuable panels and breakout sessions. Be part of key conversations about the Island’s future.
Register today for the 9th Annual State of the Island Economic Summit, held October 28 and 29 at the Vancouver Island Conference Centre in Nanaimo.