(News Release, Victoria) – Kathleen M. Birney, a civil trial lawyer, has been elected Royal Roads University’s next chancellor and chair of the Board of Governors effective June 13, 2017.
Birney has served on the board as a Lieutenant Governor in Council appointee since December 2013 and as the chair of the board’s governance and nominating committee since April 2016. Birney succeeds Wayne Strandlund, who completes his term as board chair and chancellor this month. 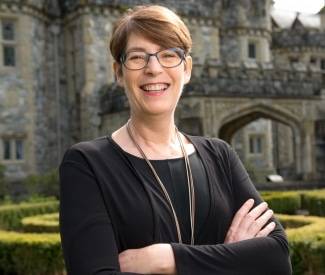 Senior counsel with Cox Taylor in Victoria, Birney has appeared in all levels of courts in the Canadian justice system, including the Supreme Court of Canada. She holds extensive experience representing clients in jury trials, appeals, administrative tribunals, mediations and judicial reviews of administrative decisions, regularly advises public interest groups and corporate and individual landowners on land use and development issues as well as environmental and regulatory concerns. Birney holds a Bachelor of Arts in Criminology from Simon Fraser University (1982) and a Bachelor of Laws from the University of British Columbia (1992). She was called and admitted to the bar in 1994.
“Kathleen’s commitment to the university along with her legal and community experience has made her a tremendous asset to the board,” says Royal Roads President and Vice-Chancellor Allan Cahoon. “I am delighted to be working with her for the advancement of the university and our students.”
Elected by the Board of Governors for a three-year term, Birney’s role will be twofold under the university’s unicameral – or single chamber – governance model. She will confer degrees and preside over convocation in the ceremonial role of chancellor, and chair the Board of Governors, which carries the responsibilities of a traditional university board and senate together.
“It’s an honour to participate in a pivotal moment in our new graduates’ lives at convocation and in the board’s strategic planning in the near future,” says Birney. “Together with the board and superb administrators, faculty, staff and students, I am pleased to champion lifelong learning through the enriching experience of Royal Roads’ programs.”
Birney will be installed as chancellor at the university’s convocation ceremonies at the Royal Theatre June 13.
Royal Roads University, a public university established in 1995, offers a progressive model of post-secondary education, delivering applied and professional programs. The university offers its students a blended learning experience combining online and on-campus instruction, as well as full time intensive on-campus instruction in undergraduate, graduate and doctoral degrees, certificates and diplomas. It also offers progressive executive, custom and continuing studies programs.