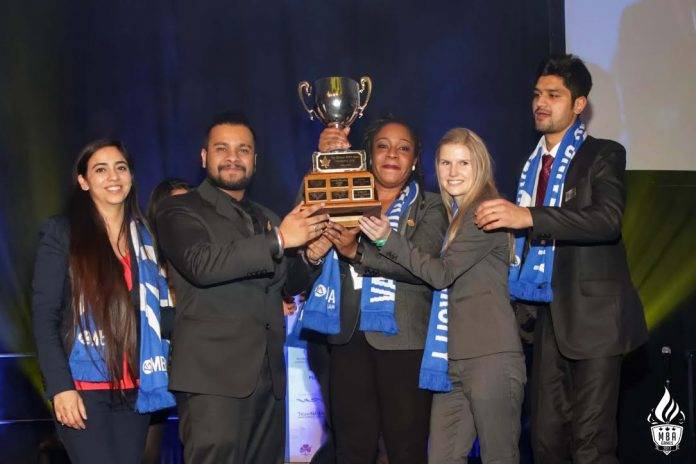 Photograph: Members of the VIU MBA Games competing team proudly display the Queen’s Cup, given to the event’s overall winner. From left: Gurleen Kaur, Navin Yadav, Nneka Otogbolu, Hailey Millet and Adtya Kumar. Otogbolu also won the CBIE Elizabeth Paterson award, along with three other VIU MBA students, who were on the National MBA Games organizing committee when the Games were at VIU.

Four VIU students won the Canadian Bureau for International Education Elizabeth Paterson Award for positive contributions to global citizenship and internationalization. The students, Dominik Beckers, Lukas Zimmerman, Ufuoma Lira Muoboghare and Nneka Otogbolu received the award for their work on the first-ever National GMA Games hosted on the West Coast. The event also set a fundraising record and collected $300,000 to support the Moose Hide Campaign. The BC MBA Games will run October 20 to 22 at Thompson River University.

The University of Victoria’s Peter B. Gustavson School of Business ranked fourth in Canada — and 21st in the world — on the annual Corporate Knights Better World MBA ranking. This ranking is based on how well schools incorporate sustainability practices and corporate social responsibility into their teaching.

Today, the CFIB announced it was pleased that the federal government implemented changes that allow small businesses a $50,000 annual threshold on passive investment income. However, CFIB says this might still be insufficient to help small businesses grow as it might still be too low for small firms that are saving to grow and create new opportunities.