When Chris Loranger and Jason Fraser cofounded Plexxis Software in the late 90s in Ontario, their vision was to have a satellite office in B.C. Fond memories of a road trip to the coast, and some family ties, were motivating factors. As was the lifestyle.

Little did they know that when they moved decades later it would be with well over half of their company. Fraser and Loranger offered all Plexxis employees the option to fly to Vancouver Island, with their families, to decide if they wanted to make the move, and many did.

More recently, Fraser and Loranger had been making trips out West. The more trips they made to the Island, the more they thought it might be better suited to achieving the lifestyle they wanted for their employees. Options in Ontario, like Toronto, were less appealing due to the cost of living and length of commutes. Their current headquarters in Brampton will be replaced by the new headquarters in the Westhills Lakepoint commercial district in Langford, an investment of $44 million for the company.

“In terms of lifestyle, it just offered so, so much more for what Chris and Jay and a lot of us see as a high-quality life for people that are going to commit to a company like Plexxis, which is very high paced,” says director of business development Chad Pearson, who emphasizes the company’s focus on a good work-life balance. “Vancouver Island took away a lot of those negative things in between work life and personal life.”

“Plexxis has always put three things at the core: performance, positivity, and physical and mental health,” says Pearson. “We’re always thinking about those things, whether we’re designing some sort of policy code or the building that we’re spending our time in.

“Coming to B.C. is a good example of that,” says Pearson. “It took us 21 years to get here. The road is long and hard but we believe that the way that we’re doing it is the right way.”

In their initial search for a B.C. location, the province was a blank slate, with several locations on the Island under debate. Putting employees first helped to make the decision, with the promise of no more than a 20-30 minute commute.

The company has held strong in its working culture. A tight-knit, hard-working and collaborative ethos that values the connection between people working in an office together.

“Part of the culture of Plexxis is that it is an extremely tight, cohesive team environment,” says Pearson. “While the rest of the world is moving in a remote work direction, we were going in the opposite direction.”

“We do spend a lot of time together sharing the same space,” says Pearson. “And it’s because of the dynamic environment and the benefits to being a part of a strong team — the belonging. The benefits that come with it with human connection and deep relationships. All of that was really important.”

Plexxis had “an OCD level vision of what the building should have.” The list included private and semi-private spaces, open collaborative space, a conference space, a gym, a lounge, space to sleep, rest, and recharge. The 60,000 square-foot, six-storey concrete and glass building will be situated beside Langford Lake. While Plexxis will occupy the top two floors of the building, the rest is available for lease.

Given the specificity of their vision, Langford was “the most accommodating. … We weren’t getting any resistance [to our ideas]. If we did get resistance, we probably would have moved on.”

Removing red tape is a point of pride for Mayor Young, and the efforts have been well received by those with a design or plan that requires fewer compromises. 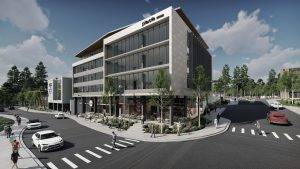 Earlier this year, the Boulder House climbing gym opened a second location in Langford. The vision for the second location — a space big enough to train for national competitions, with separate climbing zones for youth and adults — required a bespoke build that had a number of specific requirements, making it difficult to move into and kit out a pre-existing space.

“Whenever we get an inquiry about somebody wanting to move a business to Langford, I make sure that I have a conversation with them — I’ll even drive them around and introduce them to my staff and get them comfortable with the way Langford is,” says Mayor Young.

“We don’t have the roadblocks in front of entrepreneurs with new ideas and new businesses, we make sure that we’re there, we partner with them. We want them to succeed, we don’t want any business in Langford to fail. So the best thing we can do is not create a bunch of red tape and bureaucracy.”

Many of Plexxis’s employees have already made the move to Langford and will be watching as their vision becomes reality in what could be a remarkably efficient and timely build. Contractors will be using Plexxis’s own software throughout the process — no pressure!

The 7 Secrets to Langford’s success