Robyn Quinn may have majored in business and English, but she switched orbits to a STEM (science, technology, engineering, math) career when she joined the army reserves and became a communications electronics engineering (CELE) officer. Later, as senior comms officer with Atlantic Canada Opportunities Agency, she managed portfolios for life sciences, aerospace and technology.

Today, the principal of Big Bang Communications is passionate about PR for tech- and science-based start-ups. And as chair of the fast-growing not-for profit Island Women in Science and Technology or iWIST (iwist.ca), she’s also passionate about empowering women in STEM professions to feel connected and find the champions and resources they need to grow their careers. This year, iWIST’s agenda includes a STEM Entrepreneur Pitch Camp at Royal Roads University (Mar. 4), a STEM Crawl (Apr. 20) and the 2nd Leading the Way Conference this fall.

You obviously saw a need for a STEM organization focused on women — why?
We need diversity if we really want to grow STEM jobs and the sector (I don’t restrict that diversity to women; we want the doors open!). Things are changing, but there’s a definite male-centric focus … It’s not a new phenomenon and its been recognized and documented over and over … Women have been sidelined out of tech, though it was women who actually worked in computer jobs at the beginning. Watch the video CODE: Debugging the Gender Gap or the movie Hidden Figures, about the black women at NASA who were the brains behind launching astronaut John Glenn into orbit.

What’s the local landscape like now for women in STEM?
It’s a very promising, active sector with a lot of opportunity for women, especially in software development and working with code. We have several female-led tech companies. It’s one of the best ways to change mindsets: by demonstrating that not only do women belong here, they’re potential leaders. We need more role models — men and women.

What are some common problems women encounter?
Isolation: at work, where there is pressure to fit in. Being left out of male-oriented after-work activities, which creates even more isolation. Feeling worthless: condescending or inappropriate behavior in the workplace. This can range from sexual comments, which go unchecked (“Can’t you take a joke?”) to dismissing ideas and achievements. No hope: lack of management chances — or being passed over because the male way of managing is preferred. Many senior women in STEM remark how often they feel invisible in meetings …

How do we change this?
By doing two things: creating support systems for women through organizations like iWist, and encouraging the sector to admit the problem exists and tackling it with operational and cultural strategies.

What’s the business case for creating this change?
As our friends at VIATeC have pointed out, technology drives business here and creates well-paying jobs, so the future looks bright …The sector is growing. Places like Silicon Valley have become so expensive that tech companies are looking to expand to locations that appeal to their employees, upping their chances of keeping them as long as possible. Victoria and the Island offer a lot of value in that regard. The more tech talent we can offer — men and women — the more competitive we will be. 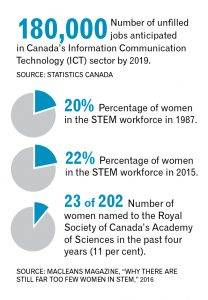