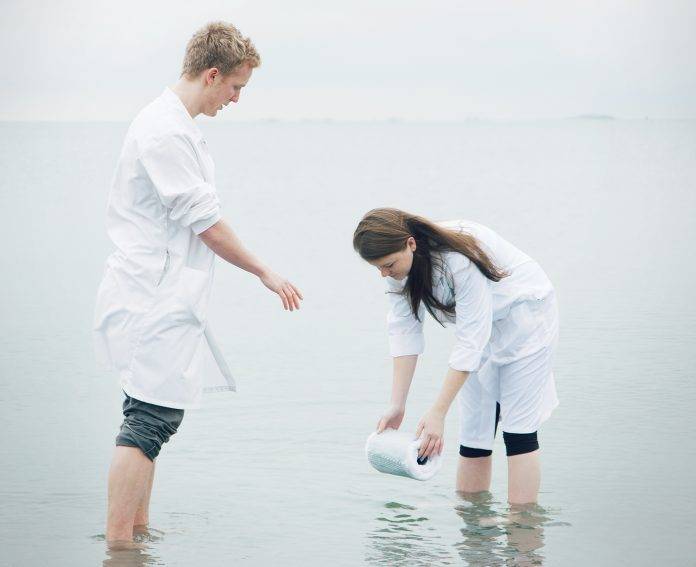 There’s no doubt that competition breeds innovation, but it’s collaboration that’s often the unsung ingredient of success. Case in point: Vicki Kleu and Austin Sawyer‘s invention of a fully biodegradable oil boom that not only contains an oil spill, but also absorbs the oil.
While Kleu and Sawyer once went head to head as competitors at local science fairs, collaboration took them to new levels and secured them several prize wins at the Canada-Wide Science Fair, including a Manning Innovation Achievement Award.
Great Minds
“We were able to develop a boom that could pick up over 30 times its weight in oil. Up to 98 per cent of the oil is fully recoverable,” says Kleu, a former Lambrick Park Secondary student, now in her first year at the University of Victoria. “And everything is either biodegradable or reusable, so it’s completely eco-friendly.”
Building off one of Kleu’s previous projects — a fibrous pad that could clean up small spills — the two worked together to convert the invention into a fully functional boom that could counteract the current delay between the containment phase and absorption phase of dealing with oil spills — a delay that often lasts days to weeks.
Awakened Potential
While the pair thought their time at the Canada-Wide Science Fair would be the end of the project, their recent presentation at TEDx Victoria has stirred a lot of interest.
“[The presentation] opened some doors,” says Sawyer, who is in his last year at Lambrick Park Secondary. “We were working out of UVic half the time and our science teacher’s classroom, so we didn’t have the space to go larger scale — which is what we want to do right now.
“We’ve had some companies that have been in contact to see how we’re doing and we’re trying to find one in Vancouver with actual testing facilities so we can make large scale oil booms.”
The student project, which Kleu and Sawyer hope to patent by this summer, has the potential to clean up and contain marine oil spills in a way even major industry players haven’t been able to develop to date.

Caption: Kleu and Sawyer invented an inexpensive absorbent boom that picks up over 32 mL of motor oil per gram of fibre. Approximately 98 per cent of the absorbed oil is recoverable and residual oil can be washed out using canola oil.