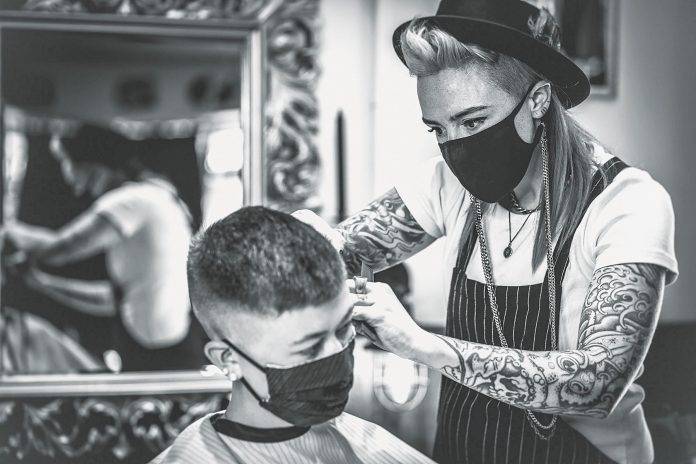 A mid vintage furniture and décor that ranges from gramophones to top hat-clad skeletons lies a vibrant culture at the heart of the hair salon, The Old Hat Hair Shoppe. From the returning customers and their smiles in the chairs, it’s clear that quality service makes up the other half of that equation.

“I was trying to build a place where you could be comfortable and a bit weird, and you could have something exceptional,” says owner Piper London. They opened the salon in 2015 when they were just 25 years old. The name comes from a little pub in London, U.K. They discovered it while they were there, completing Red Seal training at one of the world’s top hairdressing schools.

Since its inception, London has poured most of the shop’s earnings back into the business, working long hours to keep it all running. “My philosophy since day one has been take care of your people and the money will come,” says London. As part of this philosophy, London pays their staff more than they can make at most other salons. “It’s my job to make it a place that they want to be and can thrive,” London says.

This has also contributed to most of the original hairdressers remaining at the salon. With low staff turnover, The Old Hat can afford to invest in a longer, more rigorous training program than most salons.

“It means that the people who finish are serious,” says London. “They also respect the shop and themselves differently because they’ve done something quite challenging.”

Though London initially fell in love with hairdressing for the technical aspects and the human connections it facilitated, lately it’s the business aspect of the job that inspires this business owner. “I feel I have more value to the business and the community by building and sustaining this space that facilitates 12 people.”

London credits the success of the shop to the “hub of really rad humans” that make up the team. The Old Hat’s culture is not only the result of its loyal staff but of the clientele as well. The shop is constantly evolving as fashions change and they learn more about the needs of their clients. They’ve always offered gender-neutral pricing but have recently hired a barber to fulfill the requests of more people.

Though still young, London is already succession planning and feels confident and excited about a team member some day taking over.

“My long game is for it to keep growing without me,” says London. “Not that I want to leave, but if you build something wonderful, it doesn’t need you anymore.”

While Piper London has worked long hours for years running The Old Hat Hair Shoppe, they recognize this isn’t a sustainable model. To build a business that would last, London found security in owning their building. 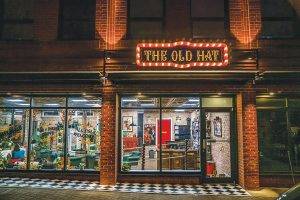 “The motivation was first to find a place that felt permanent so that we didn’t have to move a bunch,” says London. “Financially, moving a hair salon is very costly and super disruptive to the function of the business.”

The Old Hat found a new home on Lower Pandora, chosen for its old town atmosphere, and moved in last October. It’s a fairly modern building, but it still has downtown Victoria’s classic brick, which they exposed during a renovation that took 12 weeks of 10-hour days, seven days a week. “Other than where we had to have electricians and plumbers, it was elbow grease, buddies, pizza and beer,” says London.

Having sacrificed square footage for location, the new salon had no room to grow. The two rows of salon chairs divided by ornate hanging mirrors are near full every day of the week. But three months after they moved in, the space next door came up for sale, and London felt it was an opportunity they couldn’t pass up.

The renovation process will commence again soon, at a slightly slower pace this time around. Despite the cost and the hard work ahead, London feels grateful.

“It’s one of the most privileged experiences of my life,” says London. “To see something that you have grown, [evolve] into a place that you can permanently build for yourself but also to be a part of actually building it is very rewarding.”