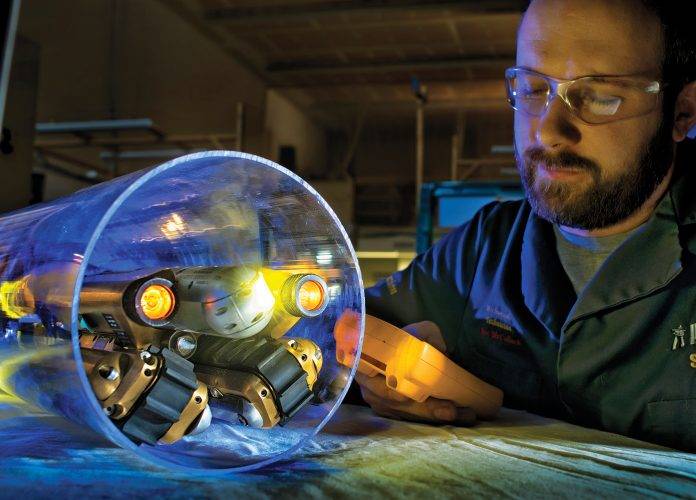 It’s like something from a sci-fi film. Picture tiny robots equipped with cameras and other remote sensing apparatuses navigating with magnetic tracks through a pipe the diameter of a soccer ball and gathering vital data.

Except this is reality for Inuktun Services, corporate innovators who are designing remotely operated vehicles (ROVs) and robotic systems that go where no human — and no machine — has gone before. Think search-and-rescue operations, surveying pipelines for damage, and inspecting the radioactive innards of nuclear power plants. They’ve also accessed restricted spaces deep within hydro dams and scanned the hulls of ships for weaknesses.

In fact, Inuktun, a Nanaimo-based company with operations in Europe and China, has carved out a technological niche that is far more exciting than you could ever guess from the firm’s bland two-storey headquarters in north Nanaimo. Nothing on the exterior hints at the technological wizardry within.

Lifesaving Technology
The Inuktun story started in 1989 as a retirement project for co-founders Terry Knight and Al Robinson, when the pair of innovators designed and manufactured an underwater swimming vehicle known as the ROV Seamor. It was, in essence, an expensive toy for private boat owners, a gizmo “for chasing crabs and fish,” says Inuktun president and CEO Colin Dobell.

Though the ROV Seamor proved to be more whimsical than market ready (“That market turned out to be very limited,” Dobell says, “but the system had other applications in marine survey and nuclear inspection”), it was the technological nugget that convinced the owners they had the keys to a potential gold mine.

However, it took time and patience to tap this vein, and Inuktun struggled early in its efforts to commercialize its robotic technology. Dobell joined the company in 1996 as a software engineer to write programs to control the robots and acquire data from on-board sensors. It was a dream job for a gadget nerd with a penchant for problem solving, but it still took some dreaming to imagine where Inuktun could go. It then had a staff of six, including the two founders, both now retired.

Today, Inuktun is an Island groundbreaker, employing nearly 60 people, among them highly skilled engineers, technicians and software developers. Inuktun services a customer base that spans the globe and includes heavyweights like Ontario Hydro, GE Nuclear Energy and other firms requiring specialized robotic technology.

Recently, engineers working for Hitachi and Toshiba turned to Inuktun for a key component. They needed special tracks that would enable custom ROVs equipped with cameras and radiation-detection sensors to travel at 30 feet a minute and inspect the humanly inaccessible interior of the Fukushima Daiichi nuclear reactor. The reactor was severely damaged by the massive March 2011 tsunami that rocked Japan’s east coast. Previously, Inuktun ROVs have sifted through dangerous rubble and debris for survivors after 9/11 in New York, Hurricane Katrina in Louisiana and the collapse of Utah’s Crandall Canyon mine.

Under the Radar
Despite the company’s success and its association with high-profile corporations and rescue operations, Inuktun flies under the radar in the Canadian technology sector. Dobell believes this is due in part to the nature of their customers, many of them in the energy, military or other sectors with high-security protocols. These customers are not in the habit of talking publicly about how Inuktun technology is deployed in their operations.

“We often don’t hear about the results or much about how our technology is used after the fact,” Dobell says. Furthermore, Canada only represents 10 to 15 per cent of Inuktun’s market, which only adds to the company’s surprisingly low profile on the domestic front and also points to an area of potential sales growth.

Dobell admits Inuktun’s Island location, geographically remote from primary customers in the oil-and-gas and nuclear sectors, poses challenges and adds to the cost of sales and marketing. But he says the Island’s quality of life and cost of living is hard to beat, and Nanaimo is where the company’s people (“the backbone of everything we do”) are located.

Global Significance
Being nimble and astute is key to the firm’s success, both on the marketing and R&D sides of the operation. The company attends several trade shows a year and makes targeted customer-specific visits to demo its technology. Inuktun has twice tapped funding from the National Research Council’s Industrial Research Assistance Program and takes advantage of the federal Scientific Research and Experimental Development Tax Incentive Program. Mostly, however, Inuktun is funded through traditional lending channels and shareholder profits (Dobell, his father and one of the original founders are the only shareholders.)

From modest beginnings, Inuktun now competes head-to-head with big players in the ROV space like German-based IBAK, Austria’s iPEK and GE Measurement and Control, a subsidiary of the giant GE. Its product line varies considerably in price. A smaller magnetic crawler system that can nearly fit in the palm of a hand sells for as low as $30,000, whereas the long-range crawler, the Versatrax 300, hits the market at a lofty $300,000.

And though the company has been at it for more than 25 years, it continues to find new applications and customers for its ROV technology. Constant innovation and adaptation to address industry needs is its bread and butter.

“Years ago, customers were happy to simply see inside of pipes and other infrastructure,” Dobell says. “Now they demand things like laser profiles, thickness and cracking measurements, cleaning and even welding.”

That’s why, for example, Inuktun is developing magnetic crawlers for ship hulls, and adding tools like rotating brushes or water-jet heads for remote cleaning operations. Inuktun engineers and technicians are also working on integrating other inspection technologies to allow remote systems to gather more information about the state of pipeline infrastructure, such as locating and measuring cracks and thinning and corrosion in pipes.

Given the proliferation of pipeline proposals, from the Kinder Morgan Trans Mountain to TransCanada’s Energy East pipeline project, and the consequent public and regulatory focus on pipeline safety, Inuktun’s business focus appears aimed in the right direction.

“It’s never boring,” Dobell says. “Even after 20 years I still learn something new almost every day. I get to work with a truly creative and sometimes crazy group of engineers and technicians, and a range of clients in some very challenging industries and applications.”