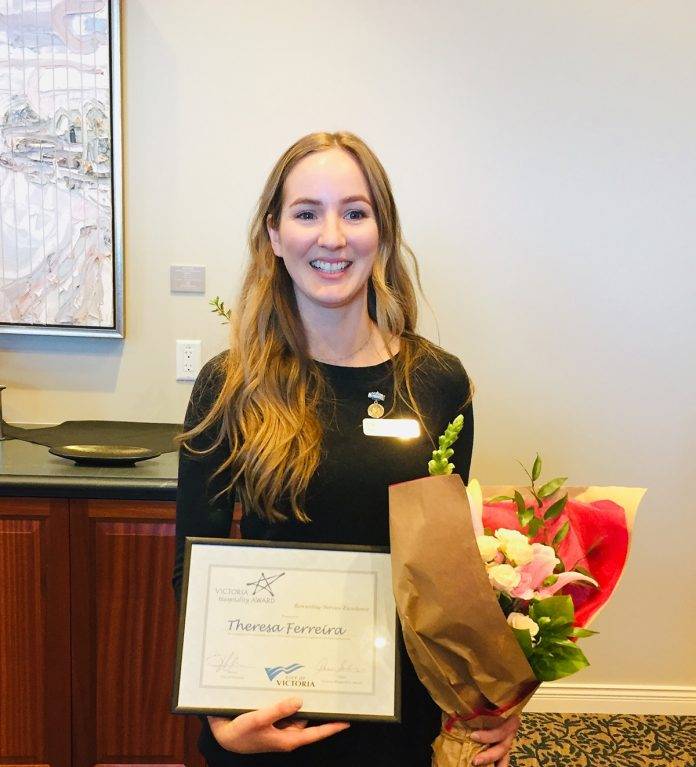 Theresa Ferreira of the Oak Bay Beach Hotel is the latest recipient of the Victoria Hospitality Award, which recognizes those in the local hospitality sector who go the extra mile in customer service. Ferreira was nominated by her colleague Madone Pelan, who wrote:

“In early April Theresa contracted a group for an event this summer.  She had followed up with the client a couple of times on an outstanding item and had been informed that the client’s dad had just passed away and this was why the client was delayed sending the final information. Theresa had built a great rapport with the client during the contracting process and was saddened to hear about her dad’s passing. Theresa promptly found a flower shop in Chicago – where the client lived, and custom ordered a bouquet of flowers to be delivered with her condolences. Theresa had let the client’s office know that there was no hurry on the last piece of information she required and granted an extension due to the circumstances. The client called Theresa the following day in tears thanking her for the kind gesture.”

“It is so inspiring to see how much Theresa genuinely cares about all of her clients and colleagues alike. This is only one small example of what she does on a regular basis.”

Committee members meet once per month to review ballots and select that month’s winner. The winners receive a signed Victoria Hospitality Award Program certificate, a letter of commendation, a City of Victoria pin engraved with the winner’s name, and numerous other gifts from Committee members representing various sectors of our community. There is a special event hosted annually to celebrate the nominees and monthly winners.