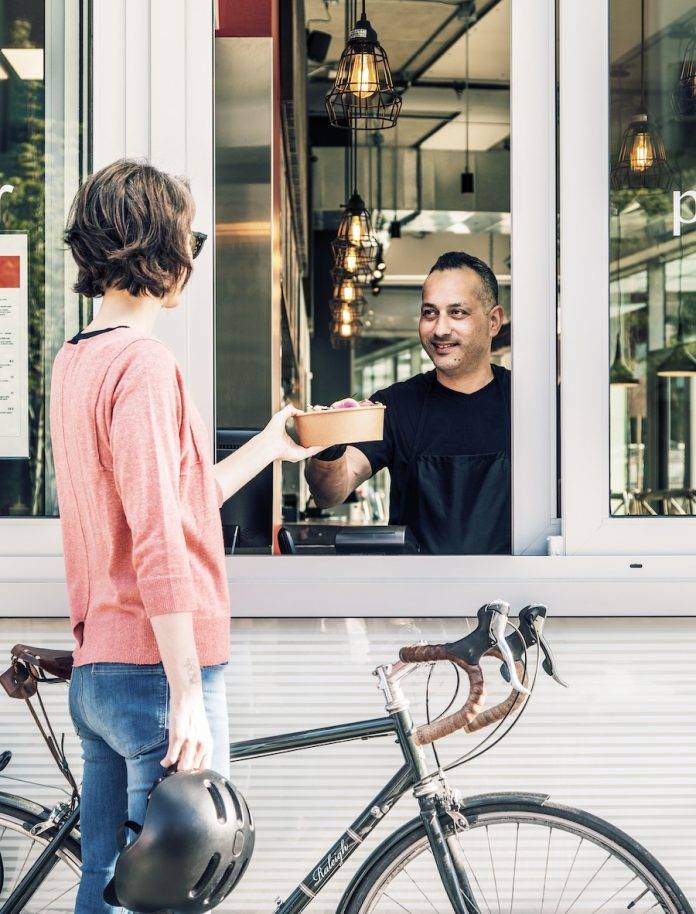 With bicycle traffic into the downtown increasing dramatically after the opening of the new Johnson Street Bridge — and an expanding network of protected bike lanes — Victoria should start to see some innovative bike-friendly businesses. Dobosala Cantina on Pandora, which opened in early April, boasts a ride-thru window where riders or pedestrians can pick up chef Kunal Ghose’s tacones, noodle bowls and cantina-crafted sopas.

“I had the idea of a ride-thru for Dockside Green along the Galloping Goose, so it’s been in my mind for seven or eight years,” Ghose says. “We were already in talks with Jawl Properties about this space when the dual bike lane came in, so I thought, why not try it right here?”

Along with its bike window, Ghose is hoping Dobosala becomes a late-night spot, with music and a modern cantina atmosphere complementing its Indo-Pacific menu.

“It’s all my favourite things from around the Pacific with a touch of Indian influence,” explains Ghose. “Much of it is designed to be travel friendly, so it’s good for those who come through on their bikes.”

According to Ghose, the concept of a ride thru wasn’t inspired by similar businesses elsewhere in Canada or in the world. To his knowledge, the concept doesn’t exist anywhere else. In fact, Ghose says this idea has been in the works for a few years.
“I’m a firm believer in the Pandora bike lane because it goes over the bridge. It’s a real connector and it’s dual lane. I think the lane added to Pandora Avenue,” says Ghose. “I don’t necessarily feel the same way about all the other lanes that are going in. But I figured, why not embrace [the bike lane]?”

For Ghose, the ride-thru model that just makes sense for his business: the new restaurant is located right on the bike lane and Fishhook has seen huge success with the business lunch crowd. Ghose believes the ride thru window will be a new way of efficiently catering to both pedestrians and cyclists.

It’s also a way to embrace a changing city: “Look at cities like Amsterdam and Portland, and how they’ve embraced bikes. I think Victoria is also very forward-thinking,” says Ghose.

Could this model inspire other businesses in Victoria to do something similar?
“I have no idea,” says Ghose. “And it’s not a concern of mine in any way. I just like to do something different.”

How the Ride Thru Works

Cyclists and pedestrians will order from Dobosala Cantina’s ride thru window, which cyclists can access right off the Pandora bike lane.“The bonus is that you can keep your bike with you — you don’t have to lock it up,” says Ghose. “Then you can wheel your food and your bike to any place you’d like to eat it.” He adds that a lot of thought is going into how the food will be prepped for takeout and the restaurant might use the Indian tiffin box concept.

Ghose also explains that the point of the “ride thru” isn’t to encourage people to bike and eat simultaneously. Rather, the goal is to make it as easy as possible for people arriving via sustainable modes of transport to get their food easily.

“You’ll pick up [your meal and] take it somewhere. It’s the same with a drive-thru, really: if you order a big meal and you’re concentrating on eating that instead of on your driving, that’s not a good thing either. Common sense would be suggested!”

Dobosala Cantina and Ride Thru is located at 760 Pandora Avenue.