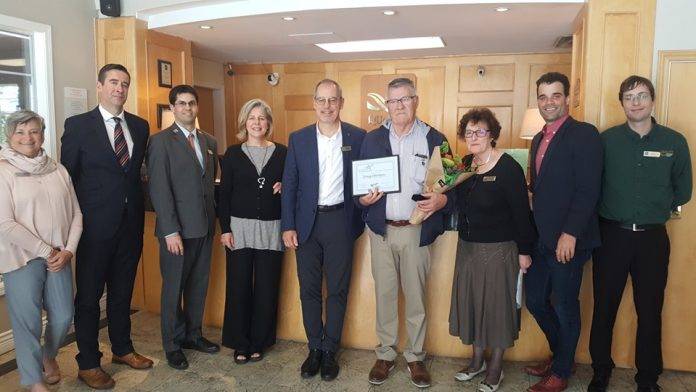 The Victoria Hospitality Awards committee has recognized Doug Abbotsford from the Quality Inn Downtown Victoria Inner Harbour for his outstanding service and literally giving a guest the proverbial “shirt off his back.”

Doug was nominated with the following story:

“Doug was doing night audit on February 6 when a guest, Crystal Smith, came down to the desk around 5 a.m. She had a huge problem. She had a very important meeting that morning, but she had forgot her blouse. She was hoping to find something in the hotel’s lost and found.

“Doug helped her look through the lost and found bins but she could not find anything. She was desperate. Her meeting was early and no stores would be open to buy a new blouse. At that point, Doug suggested he could lend her his own black shirt that he was wearing. To cut the story short, Ms. Smith took him up on his offer, went to her meeting and was just so overwhelmed with what Doug had done. Truly going above and beyond.”

Committee members meet monthly to review ballots received and to select a winner. Monthly winners are presented with a signed Victoria Hospitality Award Program certificate, a letter of commendation, a City of Victoria pin engraved with the winner’s name, and numerous other gifts from Committee members representing various sectors of our community. The Society hosts a special event annually to honour all nominees and monthly winners.

Nomination ballots can be found online at Tourism Victoria or at victoriahospitalityawards.com.