A chance meeting at a forestry conference has led to the first agreement of its kind on Vancouver Island. The Mowachaht/Muchalaht First Nation, located near Gold River, is partnering with Spatial Business Intelligence provider LlamaZOO to create and enact digital twinning software technology for improving land management and stewardship of their traditional territory.

LlamaZOO’s proprietary TimberOps software, created for this purpose, will virtually map a digital twin of the Nation’s 350,000+ hectares of territory (land and water) on Vancouver Island. Its goal? To facilitate meaningful reconciliation through shared decision-making as well as provide greater certainty for responsible development proposals of the land with industry (forestry and mining), and government.

“TimberOps will assist our people in showing the world what is within our Traditional Territory,” said Chief Maquinna, Mowachaht/Muchalaht First Nation. “It will provide prospective business partners and forestry companies with a real-time view of the results of logging, mining and other resource extraction. It will play a critical role in how we manage our lands and resources.”

Nation sees the vision for software use

Dorothy Hunt, Lands & Economic Development Manager for the Mowachaht/Muchalaht First Nation remembers how excited Chief Maquinna was when he first saw a demonstration of the power of the technology. “He wanted to get started right away,” she says. “He immediately saw what we could accomplish.”

LlamaZOO, won a Douglas 10 to Watch in 2016. It was founded by Charles Lavigne and Kevin Oke, who wanted to use simulation and visualization technology to solve real world problems – starting with medical imaging. The company has evolved to become a Spatial Business Intelligence provider with a SaaS platform that enables First Nation bands and stakeholders in mining, oil and gas, forestry, and other capital intensive industries to make meaningful and impactful decisions by visualizing their complex land data in 3D.

“We saw the power of Zlateral shifts into adjacent industries for our technology,” says Lavigne, CEO of LlamaZOO, “and we want to use the big data generated by our work to help teams communicate and make better-informed decisions through the accessible, smart data our software enables.”

Lavigne, too, remembers that fateful moment where LlamaZoo and Chief Maquinna met. It took a year from that conversation to build relationship and the platform that would meet the Mowachaht/Muchalaht First Nation’s specific needs.

“We had a hypothesis,” says Lavigne, “but that wasn’t enough. We wanted a collaborative process built on a solid relationship. We made no assumptions. We explored the path alongside the Nation. We learned their history, their challenges, their goals. We were so pleased with the result and thrilled to walk alongside them on this journey.”

Dorothy Hunt says the ability the TimberOps software gives users to virtually traverse aspects of the land, at any vantage point, from their office or home, limits the need for field visits – meaning fewer boots on the ground and less impact on the territory, while providing the opportunity to literally get a bird’s eye view of their land. 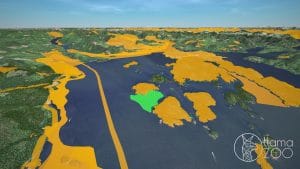 “We can query the software to model future use and how it will affect the land,” she says, “which in turn helps us juggle the twin needs of tourism and logging as economic drivers for our people. Often those two industries clash, but with this software, we can keep cut blocks away from waterways, water sheds and tourism-focused areas. We can isolate and protect culturally significant areas and we are also now privy to the same information forestry companies often have but don’t share.”

With the most data layers ever seen in a digital twin at LlamaZOO and over a century of historical BC logging data, the technology will replace previously used tools such as Google Earth and physical maps, and turn large amounts of complex landscape-level data into an intuitive, 3D digital twin.

Mowachaht/Muchalaht will use the materials that are stored in their Cultural Resource Center; such as the recorded Culturally Modified Trees, places of sacred significance, named Places, places to gather food/seafood and other cultural information to complement the new technology.

Hunt says control of land management is important to the Nation not because they are profit or value-for-log focused, but because they want to continue to be the historic protectors of their land. “Communities have stood by feeling hopeless and helpless as dozens of logging trucks drive by full of logs from their lands that they had no say over how it was harvested. Now, with an agreement like this, we can grow our economy through own-first revenue in a way that supports and sustains our environment and creates a better future for our children.”