The journey of entrepreneurship can take unexpected turns. Barnacle Systems, a security system for boats, came to be after the company’s founder and CEO Brandon Wright’s boat broke free from its moorings in Mill Bay. He realized there was a market for boat monitoring and the result was Barnacle Systems.

The remote security product was launched and would earn the company a 10 to Watch nod in 2019. The award boosted the company’s local sales by 20 per cent after the news came out.

Since then, the momentum has grown and Barnacle is now international. Its products can be found on vessels based in 40 countries, with distributors and dealers around the world. This past year saw another expansion for Barnacle. “Now we’re also a defence contractor. We protect military vessels, government vessels in both Canada and the United States,” Wright says.

The pivot into defence for a boat security system may be surprising for some, but it makes sense once one realizes that even the Coast Guard needs someone to watch over its boats. Wright’s previous career working on remote security and monitoring systems for the CIA also made it a natural fit. Wright began working the defence conference circuit, turning contacts into contracts.

“Throughout COVID, we were having to look for new types of customers because there was so much uncertainty,” Wright says. “So that’s when I started exploring the government market. I knew how to write those proposals. I knew how to get their attention. And that ended up becoming really successful for us.”

The recreational boating market also grew substantially during COVID. For some, it became a safe way to escape. However, other people were separated from their boats, and Barnacle’s product helped them check in on their vessels from their smart phones during those uncertain times of quarantines and lockdown.

“The growth in the recreational market has been huge for us,” says Wright. “The fact that we’ve grown from being in two countries to over 40 over the span of two-and-a-half years is a pretty big deal for us.”

Barnacle Systems has survived and thrived off its own cash flow, without any outside investment. The team has remained lean, with a head count of 11. “As a result of having an incredible team, we don’t need to add a bunch of people,” says Wright. And that’s with two successful arms of the business to manage. “We’re very scrappy. And we addressed the markets that were best served during that kind of uncertain time.”

It’s smooth sailing ahead for Wright and his vision.

OUTWAY: A Foot in the Business

“Over the last three years since we were given the award, we’ve definitely established ourselves as the number one direct-to-consumer performance sock brand in Canada, and probably top three in North America,” says OUTWAY founder and CEO Rob Fraser.

The sock company won the award under the name of Endur Apparel back in 2019. Today, the performance sock brand has 25 employees working out of their headquarters in Uptown — and that’s not including their fulfillment and manufacturing teams.

But for a long while, the company was a hardworking three-person startup. “We were fortunate to have a lot of support from local events like the Victoria Marathon and Tour de Victoria,” says Fraser. “I’m not sure we would have been able to build this business in many other places in Canada.

“Winning the 10 to Watch established credibility for the brand in the early days, which allowed us to capture more consumer trust,” he adds.

OUTWAY was just beginning to hit its stride when the pandemic hit. “We were starting to think of hiring more people, but at that point we just became a four-person team,” says Fraser.

During the lockdowns, the direct-to-consumer and active living markets boomed. He jumped on the opportunity. Today, OUTWAY sells over 250 sock varieties. Its biggest customer base is in Eastern Canada, but the company has chosen to keep its operations in Victoria. All of OUTWAY’s global orders ship out of Victoria.

“Victoria is unique for the fact that it’s a big small city, where there’s a very close community that supports each other,” says Fraser. “Even as we have grown, there’s a very welcoming and supportive business community that has helped me to this current day. It’s been a rewarding and fun journey.”

HYAS Infosec has also thrived off uncertain times. The cybersecurity company won a 10 to Watch award in 2018. The company traces hacking attempts back to their sources of origin and terminates them before they ever cause damage. The company flipped the cybersecurity model into offensive deterrence rather than passive defence.

When Douglas first profiled the company, venture capitalists were lining up to invest in the startup, founded in a Nanaimo basement. The money came quickly. Among others, Microsoft’s venture capital arm, M12, put in $6.2-million in Series A funding in 2019, bringing in money and expertise. Last year, HYAS’s Series B funding came to a hefty $16-million. It’s safe to say that HYAS has now ascended into the big leagues.

With pandemic work trends bringing remote work into greater prominence, digital security has come into fresh focus, attracting more business. “In a world that’s constantly changing, that plays into an attacker’s hands,” says David Ratner, CEO. “All of a sudden, there’s all these different ways to attack you.

And the beauty of HYAS is that it really provides the visibility that our customers need to make sure that they have the confidence to move forward, regardless of how this world changes.”

The company hired more than half of its employees in the past two years and expanded its product line from one to three cybersecurity options.

“It’s grown up very significantly since the early days,” says Ratner. “We’ve developed a real reputation in the market. It’s pretty unusual that you can find a 40-person company that can claim, for example, three of the [top] Fortune five as customers.”

HYAS now attracts talent from all over North America, which comes with some interesting hurdles. Ratner himself is a frequent flyer, based in California. It caused a few headaches in the early pandemic days, requiring special exemptions to cross the border during lockdown. HYAS continues to consider B.C. home — most of the core business team is in the province — and maintains offices in Nanaimo, Victoria and Vancouver.

Davies has recently stepped down from the board. “He’s retired and is just enjoying himself,” says Ratner. Other early-era employees continue to hold positions at the company while others, too, have moved on. Founding a company that can hold its weight with the heavyweights: not a bad way to finish off a prestigious 20-plus-year career in the information security industry.

Bruce Livingstone did the opposite: he came back from semi-retirement in 2009 to create the Victoria-based global stock photography agency Stocksy. It is a premium alternative to the current stock photography companies, an industry that he’d been involved with since 2000. (Livingstone arguably invented the microstock business model.) Like Davies, he took an industry paradigm and flipped it over. Instead of diving in head first, though, Stocksy’s approach was to take it slow. 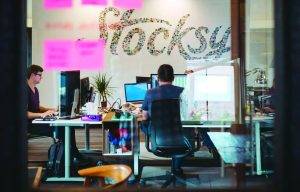 The company was awarded its 10 to Watch award in 2015. That year became a year of incredible growth for the company. Stocksy built numerous partnerships, including one with Adobe. “It’s a really great symbiotic relationship between the two companies,” says Livingstone. “We elevate their collection, and in turn, we get a lot of sales.”

Stocksy has carefully built up a collection of premium content, betting that its more creative approach would pay dividends. It worked.

At the time of the award, Stocksy had 20 staff members and 770 contributors. Since that time, the company has tripled its staff and has almost 1,700 photographers working in 80 countries around the world. Since its start in 2012, Stocksy has paid out over $50 million in royalties to its contributors. Royalties paid out per fiscal year have doubled since 2015. Big numbers, but Livingstone says that the focus has always been on sustainable growth.

This slower approach is also built into its business model. It is a co-op model, where photographers and videographers get a bigger say in the direction of the stock photography agency, and profits are shared back with its creators.

“Our values at Stocksy are about being progressive, inclusive, empathetic and collaborative,” says Christina Minshull, Stocky’s global head of marketing. “I think having that ingrained in the culture and in the leadership helps us succeed in business.”

The company actively seeks diversity in its partners. Recently, this has included encouraging Indigenous communities to become more involved in the stock photography industry, particularly in Canada and Australia.

With such an international collective, Stocky’s team itself is also spread out across continents. “I think that’s what makes Stocksy so powerful, is that we do have different perspectives from different cultures and different countries,” says Minshull.

But at the end of the day, Stocksy retains strong Victorian roots. Its website proudly lists a Market Square office address. Livingstone, who has long retired as Stocky’s CEO, continues to play an active role in the company as chair of the board.

As Stocksy matures, he is staying around mainly to mentor the next generation of leaders. “I feel like it’s my responsibility to train and hand over my wisdom from the last 30 years of experience, to make sure that other people have an opportunity to be in a position of leadership.”

The nomination deadline for the 2023 Douglas 10 to Watch awards is November 6. To nominate your business or one you admire, click here. 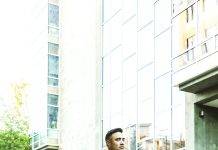 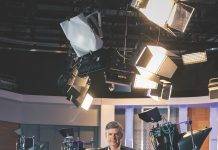