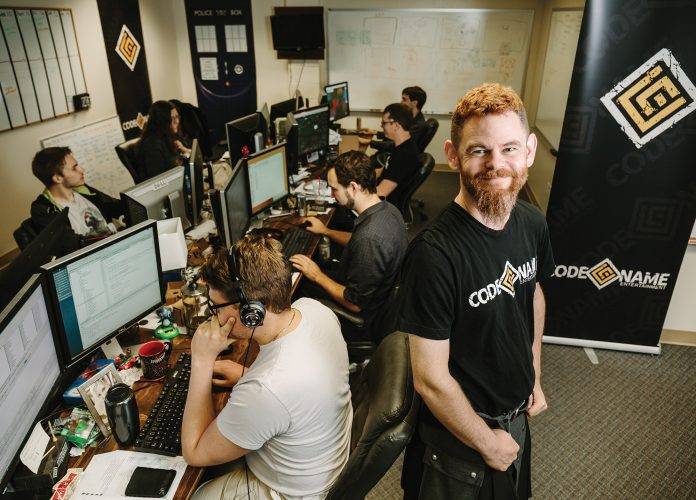 Leadership is the must-have, gotta-get-there gold standard for companies big and small. Douglas asks local leaders like Eric Jordan of Codename Entertainment what leaders of today need to succeed.

The quest to become a good leader now feeds a vast industry of corporate retreats, TED talks, MBA specialties, consultancies and counselling, and keeps a vast number of worried business owners awake at night wondering if they’ve got what it takes.

So what does it take to be able to call yourself a leader — not just in that old-fashioned way that meant you were the boss, but with all the angel chorus and self-actualized glory of the word when describing someone who doesn’t just call the shots, but does it in a way that is inspiring, engaged, merciful and brilliant?

“If leadership were easy, we’d all step into those positions,” says Carolin Rekar Munro, associate professor in the Faculty of Management at Royal Roads University, where she teachers leadership in the MBA program.

“You’re constantly having to look in two directions: outside the organization, doing the environmental scan to come up with something unique and different; and at the same time, thinking about your employees and how you will keep them as the strongest, most motivated team.”

Victoria business icon Gordy Dodd of Dodd’s Furniture and Mattress views leadership as “basic curiosity, a need to do more than is required.” Dodd won the Leadership Victoria Rotary Community award last year for his leadership, and believes good deeds done in the public eye inspire others to do the same.

Still, much of the work of a leader takes place where nobody but staff and a few sharp competitors can see.

The proof of it might not even be visible to the world — or you — until everything goes sideways and suddenly all eyes are on the business that’s managing through the chaos.

“You may not know you’re an effective leader until you’re required to step up,” notes Rekar Munro.

But while the final test may come with crisis, the preparation will be years in the making. Read on for advice from some of Greater Victoria’s own brilliant business minds on what true leadership is all about.

1) Create a Workplace You Want to Be At
“With all the things you’re going to be dealing with, start with making the kind of place that you want to work at,” says Eric Jordan, CEO of video-gaming company Codename Entertainment. “It’s tough creating a company, but one thing you can do is choose the environment you want.”

That environment should be one “in which people can succeed and get things done,” says Deirdre Campbell of Tartan Group, a marketing communications firm. Business leaders also need to make time in their lives for thinking, recommends Jordan. He meditates, but says people can settle on whatever thing allows them space to think.

“Building a business has a pretty direct correlation with coming to work from a really grounded place, with no self-delusions,” he adds. “I recommend people find a thing that helps to remove all the mental clutter.”

2) Know and Share Your Vision
“The number one reason why CEOs fail is a lack of communication skills,” says Campbell. “I equate communication with really good story-telling abilities — why you’re going in a particular direction, the story that will get your team on board and create a shared vision.”

With a clear, shared vision, staff know where a company is going and feel connected to the journey, says Susan Low, executive director of Leadership Victoria.

“Leadership appeals to a shared vision of success, a shared message to get people to go along with you rather than just using power, “ she adds. “If you know your values and act on them, you will attract people who share those values, and those who don’t fit won’t stay.”

Rekar Munro notes that a clear vision helps businesses not lose sight of what matters.

“The key is to be crystal clear as to what you are in business to do,” she says. “If you pride yourself on sustainability, then every person you hire needs to share that vision. Whenever there’s an opportunity to grow, always ask that question: Is this move aligned with our vision and mission? When we talk about what we’re doing to ground our business, it’s always on mission and vision.”

3) Build a Great Team
Nobody wants to feel “like a cog in the wheel,” says Rekar Munro. “Even if you ultimately can’t keep your business afloat, at least be a decent person to work for.”

Generational differences are more noticeable than ever as the independent, values-driven Generation Z enters the workforce, says Leadership Victoria’s Low. If Gen Zs (born 1981 to 2000) don’t feel the love, they move on quickly.

“Trust is such an important part of leadership. What is trust for this new world? The younger generation is questioning a lot more,” says Low. “You want to be delivering what you say you’re going to do, and be transparent.”

Employee engagement is at a 30-year low in Canada, notes Rekar Munro. That should alarm employers.

“At the end of the day, you can have all the organizational vision and strategic vision you want, but you are not going anywhere unless you pay attention to your people,” says Rekar Munro. “If they start leaving, you lose stability.”

Absenteeism is a signal of employee disengagement, but so is ‘presenteeism,’” adds Rekar Munro. “The person is there, but not giving 100 per cent. That is leadership — to bring that person back to engagement.”

4) Share the Power
“When you’re busy, it’s so easy to just say no, I’ll do it myself,” says Campbell. “I’m really trying to be conscious of pushing my staff out to be seen instead. True leaders see the value of collaboration.”

Relinquishing power is admittedly “a bit scary,” acknowledges Low. But in reality, sharing power with your employees strengthens your business. “Business leadership shares information, and trusts people on the team to act in a way that is constructive.”

Delegating authority is “the transition that most of us go through in our own leadership,” says Ian Batey, principle of IPB Consulting Services and a volunteer coach and mentor with the Chamber of Commerce Prodigy program.

“If you trust your staff, you aren’t looking over their shoulder or questioning their decisions. The key piece in moving from supervisor to strategic leadership is to be able to release that sense of power and authority to the people you supervise.”

5) Take Those Risks
“You learn a lot from taking risks. But you want all the right tools in the tool box before you do it,” says Frontrunners owner Rob Reid. “You want to have thought things through. In retail, we can do anything, but I have an accountant who has saved me.”

Most business leaders will have to take risks sooner or later, says Rekar Munro. So be prepared.

“Build effective teams, learn change management and learn how to take people out of that resistance and fear of change,” she advises. “The character-building aspect of your leadership legacy comes during the hard times. Embrace those times, because that’s where your skills will be built.”

Vancouver Island is such a popular lifestyle destination that local business owners routinely take risks just to be able to live here, says Deirdre Campbell. “People who love it here have had to be creative to make it work. Creative leadership breeds innovation.”

6) Be Involved With Your Community
Rob Reid was so impressed by the community-building efforts of the Ben and Jerry’s ice cream franchise in the mid-1990s that he started Runners of Compassion, a non-profit that now supports a variety of programs that feed hungry people, put shoes on youth, and share the joy of running in developing countries.

“You have to look at your business as the community,” he advises. “If you’re building community, it’s all going to come back to the business.”

Jordan recalls the moment when he first realized that “if I wanted my community to be different, I had to actively participate in it. When that light went on for me, it was like a touchstone.”

Jordan feels a particular connection to homelessness as a community issue due to his own childhood memories of having to visit food banks, and has now incorporated messages about homelessness and a pay-to-play aspect benefiting the Cool Aid Society directly into one of his company’s video games.

Dodd’s support for Thanksgiving and Christmas dinners for homeless and impoverished people feeds more than 2,000 people a year. He also organizes social projects in his homeland of India, including a three-day medical visit for women in rural Indian communities and support for the medications or interventions they needed.

“You do something right, and people appreciate you for it,” says Dodd.

7) Share Your Knowledge and Ask Others to Share Theirs
“There are many people in this town who welcome the opportunity to help others be successful,” says Campbell. “I’ve never been turned down when I’ve invited someone for coffee.”

The exchange of ideas among mid-career students in the Royal Roads MBA program is one of the best aspects of the course, says Rekar Munro. “We can learn an awful lot about running our business when we step outside of our own industry.”

Business coach Batey sees his volunteer work as a mentor through the Chamber of Commerce Prodigy program as a “fundamental responsibility” of his generation, and one that gives back by keeping him current on how coming generations think and act.

Far from feeling like a person at war with other businesses in the community, the modern business leader understands that ‘a rising tide floats all boats,’” says Campbell.

She’s an enthusiastic supporter of B Corp certification, a movement out of the U.S. to certify businesses based on standards of social sustainability, environmental performance, accountability and transparency.

It sums up where the world is going, where leadership is going, says Campbell. “Ultimately, we all have the same goals. Even if you’re a competitor, I want you to succeed.”

“I think business in 2015 is more ethical than it has been in history. We’re less sexist, less racist, less homophobic, more environmentally connected,” says MacDonald.

“Fifty years ago, you weren’t even pretending you were environmental, or that your female employees were worth as much as your male ones.”

Rekar Munro adds that leadership is the difference between “knowing the right thing to do and doing it.” And it all comes down to people and relationships.

“You always have the option of treating people good or bad, fairly or unfairly. You want to ‘win’, but win on best product, best service, best price,” advises Rekar Munro. “Explore who you are as a leader, and how to move closer toward the leader you want to be.”