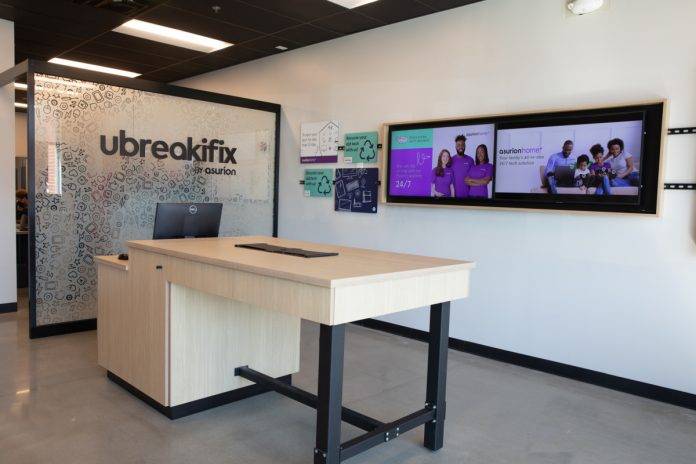 While many manufacturers have moved to online repair services —  mail in your phone and they’ll mail it back — Sumeet Thapar, co-owner of Victoria uBreakiFix believes the value of a brick and mortar repair shop is only growing. The chain of electronics repair shops opened a downtown Victoria location this May.

“Our lives are dependent on phones,” says Sumeet who operates the business with his brother Vineet Thapar. “If somebody asked me what my wife’s cell number is or what my home phone number is, I might not even remember.  We cannot wait a week or ten days for our phones to be fixed.”

The uBreakiFix promise: same-day repairs. Located at 1088 Douglas Street the store is built so customers can drop off their phones and have them fixed while they complete their other errands or sip a coffee.

Phones aren’t the only thing uBreakiFix specializes in: the brothers have seen everything from tablets and desktops, to game consoles and a remote control helicopter. Anything to do with electronics, they will fix.

The brothers have worked in the electronics space for 20 years. They began with a small kiosk, helping customers add software or music to their Nokia and Motorola flip phones. As cellphones grew and evolved, so did their business, and they opened their own mom and pop electronics repair shop. Now they own 10 uBreakiFix stores on the lower mainland, as well as the new Victoria location.

What drew the Thapar brothers to uBreakiFix was the access to original manufacturer parts and tools. From waterproofing to large screens with thin bezels, technical advancements have come a long way from the flip phones of the Thapar brothers’ beginnings. While the expense of purchasing a new cellphone has driven up demand for quality repairs, it’s also increased the complexity of these fixes. Having access to the proper resources allows them to guarantee a good-as-new phone.

uBreakiFix, is an authorized repair centre for Samsung, Google, LG, and Microsoft, and they have a partnership with Apple that gives them access to original parts and tools.

“Anyone who does not have access to the genuine Samsung tools will be doing injustice to the customer,” says Sumeet. They will not have the proper tools or computerized machines to open up the phones. In a [non-authorized] store they would use a screwdriver to open up [the phone], whereas in the case of Samsung, you just put the phone in the machine and the phone opens up.”

Direct access to suppliers, and being part of a network of 600 stores, is what allows uBreakiFix to fulfil its promise of being a same-day repair shop.

“Most stores would only have inventory from the most popular Canadian model, nobody would have inventory for models from the US, Asia and so on,” says Sumeet. This is especially important for the downtown Victoria location which is expected to see lots of tourists.

“99 per cent chance, no matter which phone, which model you have, there will be a uBreakiFix around which will have [the parts] in stock. Or if it is such a rare model, we’ll get it within 24 hours.”

Policies for privacy: safekeeping data in a digital world