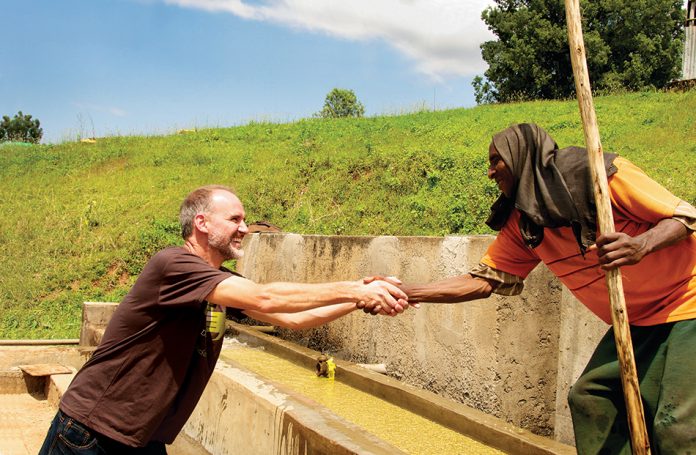 For these passionate local innovators, making the world a better place goes well beyond a trendy marketing strategy.

In today’s socially conscious economy, there’s no shortage of social-media-savvy businesses claiming to “make the world a better place.” The expression is so popular, it has its own easy-to-hashtag acronym, #MTWABP. As a marketing strategy, it’s been used to describe products as varied as fund-raising software to time-saving apps; the practice of startups making the assertion has become so ubiquitous, it’s a running gag on the HBO sitcom Silicon Valley.

So, what businesses are actually doing things to improve the human condition? Not surprisingly, Vancouver Island — with its thriving triple-bottom-line economic ecosystem — is home to several entrepreneurs and entrepreneurially minded organizations whose work has true potential for a substantive positive impact on many people’s lives.

Conscious Capitalism
Charity is not a word the founders of Level Ground Trading like to use. The Island company deals directly with many small-scale farmers and producers in developing countries, giving them a fair price for their goods — and offering consumers an ethical product.

“We never use terminology like ‘helping farmers,’ because we’re not sponsoring them, we’re doing business with them,” says co-founder Stacey Toews. “We have as much to gain from the partnership as they do; it’s how we run our business.”

The company was founded in 1997 by two couples: Hugo and Tracey Ciro, and Toews and his wife, Laurie Klassen, and the initial headquarters were in Hugo and Tracey’s garage. The motivation was addressing trade inequity and what the Colombian-born Hugo saw as a detrimental lack of communication between producers in developing countries and North American consumers.

“It’s not just throwing money at farmers,” Toews says. “Connecting a good price to good quality is central to this. We want farmers to see that it’s a replicable relationship, season after season and harvest after harvest. You didn’t get this money for this product because you won the lottery: you gave us a really good product and because of that we are buying at a really good price. It really has a cause-and-effect sensibility to it.”

Level Ground’s first trade relationship was with a cooperative of small-scale coffee farmers in Colombia. Eighteen years ago, with world coffee prices at a record high, its first purchase was a half-container of coffee that launched under the brand of Café San Miguel. From interviews and visits with the trade partners, Hugo learned the farming families’ greatest ambitions were to see their children go to school. He found a group of dedicated teachers and community members who joined together to form Famicafé. In that first year, six students were provided full scholarships to high school. Those original students all completed high school with top marks and attended university and technical colleges on Famicafé scholarships.

Now, in 2015, the company uses the tagline “5,000 farmers in 10 countries.” It is a direct importer and roaster of specialty coffees from Colombia, Peru, Bolivia, Tanzania, Ethiopia, DR Congo and the Philippines, as well as of tea from Assam, India. Using the same Direct Fair Trade model, Level Ground also imports organic dried tropical fruit and sugar cane, and, most recently, heirloom rice from the Philippines and spices from Sri Lanka and India. Results from its fair trade practices include: premium prices paid to 5,000 farming families each year; annual enrolment of 120 rural students on scholarship to high school and university; infrastructure improvements for rural schools; health-care benefits for mothers in Tanzania; and microcredit loans.

“Every country is different; every producer group is different,” Toews says. “Whatever they want, we endeavour to see that come about, never presuming we’re the saviours walking in and telling them how to do it. It’s more listening and then responding with a business partnership that puts money at the specific issues they’re wanting to see addressed.”

Level Ground is a great example of conscious capitalism, where profit, sustainability and achieving social good are not opposed to one another. By viewing the business holistically, and as part of a larger ecosystem, there is no need for the business to sacrifice its social mission.

“A critical part of what we want people to see is the power of your everyday buying decisions,” Toews says. “Charity is not where the bulk of Canada’s money goes; most people donate a couple of per cent at best … so why can’t those everyday exchanges, especially the purchase of food, be part of a better life for farmers?”

The result is a company that is excelling both in profitability and in its social mission.

Innovating Change
The ability to make the world a better place is greatly enhanced by fostering a deep understanding of how the planet works. The ocean, which covers 70 per cent of the planet, provides food and resources, moderates the climate and supports most of life on earth. With this in mind, Ocean Networks Canada (ONC) was established in 2007 as a major initiative of the University of Victoria to operate and manage the world’s leading ocean observatories. These observatories comprise hundreds of miles of cables along the ocean floor — the Neptune and Venus systems — that contain hundreds of sensors over a wide range of ocean environments. ONC provides the collected data freely to anyone.

“Understanding the pace of climate change in the ocean, how the change is affecting ocean ecosystems and human society on small and large scales, and what steps might be taken to mitigate adverse affects of change is paramount,” states the ONC strategic plan.

The impressive depths of its research notwithstanding, ONC’s president and CEO, Dr. Kate Moran, is an integral element of ONC’s potential to be an innovative force of positive change in the world. Before coming to ONC in 2011, the world-renowned ocean engineer was seconded to the White House Office of Science and Technology Policy, where she served as an assistant director and focused on Arctic, polar, ocean, the Deepwater Horizon oil spill and climate policy issues.

Moran calls her move to ONC serendipitous. After she was invited to apply for the job, she came to Victoria to visit and meet the team. In the cab on the way home from the airport in Washington, she happened to catch a radio interview with President Obama’s science adviser, John Holdren.

“The interviewer asked John, ‘Among all the science that you are responsible for in the United States, what is the most important?’ And John — who is a brilliant scientist, whose office spans all kinds of science, from the research needed for spies to nuclear issues — said, ‘The most important thing we need to do today is observe the Earth.’ And I just had an interview where I could be running one of the world’s best Earth-observing systems. It made me think I should roll up my sleeves and do it.”

Moran believes that in terms of climate change, the observations made by ONC are crucial. And the longer the records are kept, the more valuable the data can be.

“The critical part about what we do is that it’s not just one measurement,” she says. “As we observe whether it is warming or more acidification or decreased dissolved oxygen, we can detect that impact, if you will, but then we can also observe the impact on life in the ocean at the same time. And that’s the real power of these observatories. It’s within the multiple types of observations we are making that we can sense the change.”

A non-profit society, ONC still brings an entrepreneurial approach to its organization. Recently it has been using its research and technologies for wider purposes. Its Smart Oceans program is developing data products that serve a wider range of stakeholders than just scientists. An example is a sensor for the shipping industry for improved marine safety.

“We’re also working with two Canadian companies that have the best digital hydrophones in the world,” Moran says. “We are able to use that technology to actually locate the positions of marine animals and understand their interaction with these environments much better.”

Recently, ONC revealed its earthquake notification technology. Its offshore sensors can detect the first signs of an earthquake and send out notifications, allowing critical actions to take place that can save lives and mitigate damage.

“It can provide a 30-to-90-second alert ahead of major earthquake ground shaking,” Moran says. “And we have a whole list of other ocean analytics that we are working on.”

Culture of Caring
Sometimes making the world a better place is as simple as a business emphasizing public service and volunteerism among staff. While many companies take part in occasional events, be it food drives at Christmas or charity fundraisers, the truly noteworthy make giving back a year-round integral part of their company culture.

Elton Pereira, co-founder of the Victoria-based software company Paretologic, believes it’s important for a business to share success and take part in local and international causes that speak to the company’s values.

“Our charitable activities give our team a sense of pride and purpose and have provided valuable opportunities for bonding and working toward common goals,” he says.

In 2014, ParetoLogic invested in Change Heroes, an innovative social enterprise that gives individuals and charitable organizations a powerful platform with tools to effectively fundraise, resulting in the building of schools that impact hundreds of thousands of children in the developing world.

“I wanted to be part of something new, exciting and impactful,” Pereira says. “He allowed me to be his first guinea pig and fortunately I was successful in utilizing social media and personalized videos to recruit 100 of my closest friends and family to donate $3.33 per day for three months for a total of $30,000. This built three beautiful schools in Rajasthan, India.”

Shortly thereafter, ParetoLogic invested in and partnered with Change Heroes. Through the organization’s close relationship with Free the Children, they were able to raise $20,000 to build an additional two schools: one in Kenya and one in Haiti.

“The world has changed, and how people raise money has changed,” says Pereira. “With Change Heroes, it’s fun to be working with a social enterprise that connects people in a new and innovative way to positively impact as many children, families and communities as possible.  We feel that education is extremely important and by providing access to education we can cause change and improve people’s lives – now and in the future.”

And that’s what #MTWABP is all about — it shouldn’t just be a marketing gimmick. Whether your business is founded on a fair-trade model, your research has the potential to change the world, or you simply weave philanthropy into the fabric of your company culture, doing good is good business.

Photo: Reg Van Lierop, operations manager for Level Ground Trading, with a worker at the Fero Co-op in Yirgalem in Sidamo, Ethiopia. Coffee is the primary source of income for the people in Yirgalem and farmers in the Fero Co-op receive premiums for their coffee because it is considered among the best in the world.