Harbour Air Introduces 10,000 Honey Bees, Solar Panels and a “Bee-Cam” To Make Victoria Harbour Airport Greenest in World June 12, 2017
News Release, Victoria, B.C. — To celebrate its 10th anniversary as North America’s first carbon-neutral airline, as well as the 1st anniversary of its custom-built Victoria location, Harbour Air is deepening its commitment to sustainability by introducing a colony of honey bees and 50 solar panels on the one-acre grass roof of the Victoria Harbour Airport. 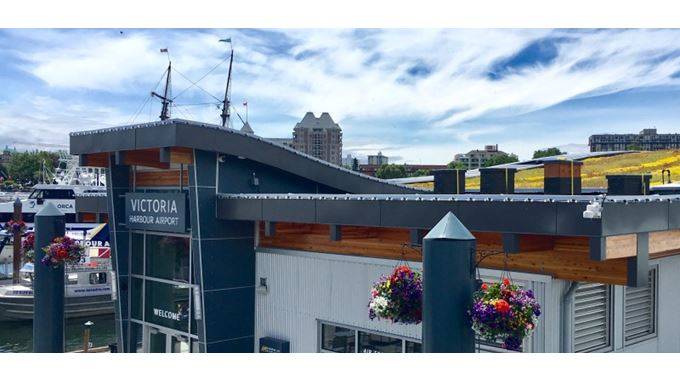 The four large beehives, containing an initial 10,000 honey bees that will grow to more than 200,000, are designed to help Victoria’s urban ecosystem combat the decline in wild bee populations around North America. In some areas, bee populations have declined by over one third, meaning urban bee colonies have become essential to ensuring there are enough bees to help plants pollinate.
“Harbour Air is making an important contribution to the Victoria ecosystem, ensuring we have enough bees for our plants to pollinate,” said Bill Fosdick, the president of the Capital Region Beekeepers Association, who is overseeing the introduction of the bee colony.
“Given that Harbour Air flies more than 450,000 passengers every year, this will also be an important way to educate people of all ages on the importance of honey bees to our local environment.”
President Randy Wright explained how all employees are encouraged to suggest ideas to continue to innovate its service and the theme of improving sustainability is a re-occurring one. It was also upon the suggestion of the staff, after having been included in the initial design of the green roof, to take it a step further to also install solar panels.
“First came the bee idea and then the idea of generating our own electricity to help run the airport really caught on amongst the team. Once they made the business case for it, it made a lot of sense”, said Wright. To tie everything together, a screen has been installed in the airport lounge which will track the amount of electricity the solar panels are putting back into the electrical grid as well as monitor the bees using a “bee cam”.
The bee cam will be available for anyone to log into and will run a live broadcast of the bees as they expand their colony.
“Harbour Air led the industry a decade ago by becoming North American’s first carbon-neutral airline, reducing our energy consumption and off-setting our full carbon footprint,” said Wright. “We’re continuing this commitment to the environmental health of British Columbians and the planet by introducing these bee hives and solar panels, to show that companies and their employees can act locally to make meaningful contributions to sustainability.”
“I think this will be the world’s first floating bee hive,” added Fosdick. “I think it’s going to be a great educational tool that will get a lot of attention. And the bees are already producing honey. It’s delicious.” Harbour Air is North America’s largest seaplane airline. It flies more than 450,000 passengers annually, including commuters and tourists throughout coastal British Columbia. It currently offsets 100% of its carbon footprint with the help of Offsetters, Canada’s leading provider of sustainability and carbon-management solutions.