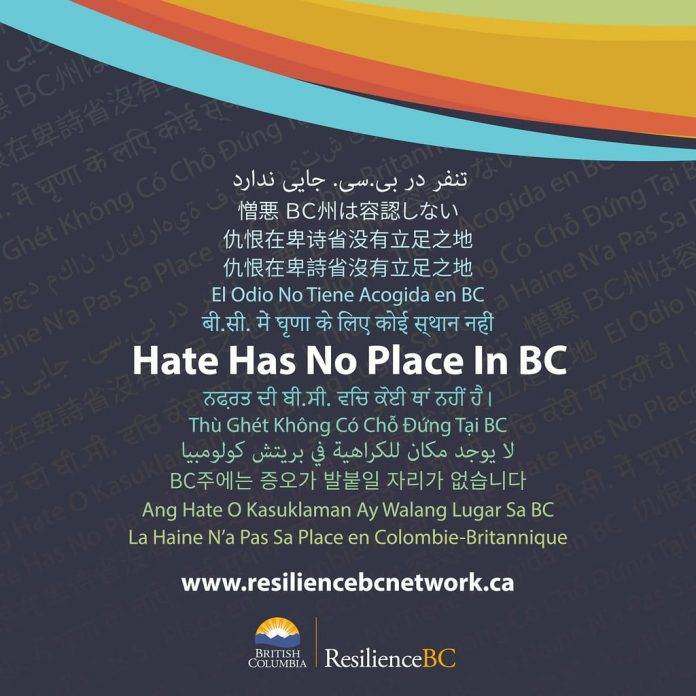 A Victoria non-profit is playing a vital role in helping stem the rising tide of hate crimes and racism in BC.

This past May, the Victoria Immigrant and Refugee Centre Society (VIRCS) won a contract from the Government of B.C. to manage its Resilience BC program, a province-wide anti-racism network delivered through a hub-and-spokes model. The organization will serve as a provincial hub to connect community organizations (spokes) with information, training and resources throughout the province.

“We’re both excited and honoured that the Province chose a non-profit like us to administer the program,” says VIRCS Executive Director David Lau. “Working with us means there’ll be nimble, swift response and action to address systemic and institutionalized racism at a local level.”

Resilience BC’s strength as a program, says Lau, comes from its ability to connect and communicate between not only communities, but through outreach, social and justice-related organizations. “We will be scheduled to meet on a monthly basis (online to start), which means we’re hearing where the challenges are and where the need is at a grassroots level.”

What is Resilience BC, and why does it matter?

Resilience BC is an outcome of a series of community consultations on racism led by Ravi Kahlon, former parliamentary secretary for sport and multiculturalism, in 2019. It also finds its roots in the Province’s Organizing Against Racism and Hate.

“It’s important to understand that hate crimes are a legal construct and in Canada the bar for what is prosecutable as a hate crime is set rather high. Many highly offensive activities are hateful and have the same impact as a hate crime but from a legal position they are not crimes,” says Lau. “We’re there to identify and support victims of both hate and hate crimes. There are also very serious impacts for bystanders. As we start to communicate with the regional spokes in the network, we will hope to create both training and support to bystanders so they can assist in safe ways, and also come to terms with the upsetting experience.”

Resilience BC collaborates with police and justice departments to educate, train and inform front line teams on appropriate responses when encountering racism and hate in their work.

Victims of hate crimes and racism are devastated physically and emotionally but are hesitant to go to the authorities and don’t always know where to find support. “Imagine you’re a temporary foreign worker and you’re spat on in a store. Or an international student chased by a person on the street. You feel bewildered, isolated, vulnerable and alone. That’s where the Resilience BC network comes in. We connect victims to the support they need and we report on the incidents and trends so we have a clearer picture of the level of hate crimes and racism. That in turn helps determined where resources and education are needed.”

Lau says the province has seen over a 200 percent increase in hate activity over the last two years, and those are often organized, with participants specifically targeted for recruitment. “Through our communication and connection in communities across BC,” says Lau, we can tell where the hot spots are for hate-based organizations, where they’re recruiting, and who they’re looking for. Unfortunately, the pandemic has exposed people’s vulnerabilities, which makes them far more susceptible to conscription by organizers who spread fear-based hate.”

Under the Resilience BC program, 34 organizations were selected to provide services in 40 communities throughout the province following a competitive procurement process. The organizations chosen demonstrated a strong understanding of racism and hate issues and have a defined course of action at a local or regional level driven by community partnerships.

Island organizations receive funding Resilience BC to further their work

The B.C. Government recently announced seven new organizations offering Resilience BC services on Vancouver Island and the B.C. coast, including:

“We are grateful to receive this funding through the Resilience BC program,” said Lynn Weaver, executive director, Cowichan Intercultural Society. “This funding will help amplify grassroots actions in our community, ultimately contributing to the Province’s actions to end racial injustice throughout B.C.”

The total investment in the program is $540,000 annually, with $300,000 from its budget allocated to fund community spoke services. There are two funding models:

Online support for victims and members of the public now available

Resilience BC has created an online portal to support people who experience or witness a racist incident. The website offers information in 12 languages. Multilingual videos will soon be added to the site: https://hatecrimesinbc.resiliencebcnetwork.ca/

“There is no place for racism and hate in British Columbia. To fight racism and hate crimes, we must work together in a co-ordinated way in communities in every corner of the province,” said Anne Kang, Minister of Citizens’ Services and responsible for Multiculturalism. “These community organizations will lead action at a local and regional level to respond to and prevent racist and hate activity.”

Insight into Inclusivity – How to Play Our Part in Ending Racism