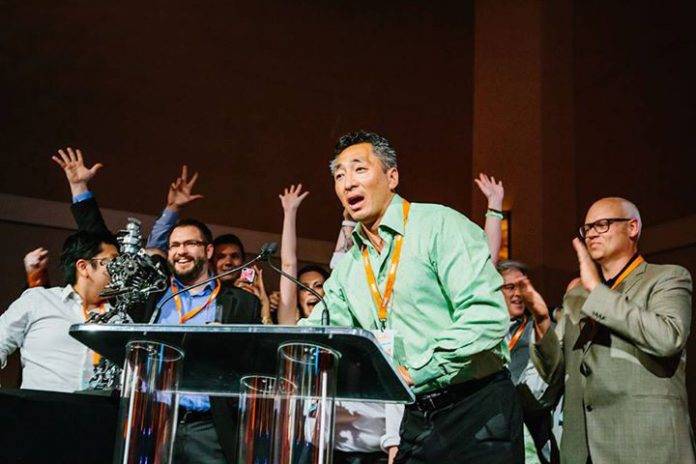 The winners of the coveted VIATeC Technology Awards were revealed on June 23 in front of a record crowd of 756 people at the Victoria Conference Centre.

The sold-out event broke all previous attendance record for the awards, showcasing 13 winners were chosen from a record number of 100 nominations. The awards celebrate the achievements of technology companies responsible for making Greater Victoria the fastest growing technology region in British Columbia.

“We’re thrilled to see the technology awards move from strength to strength,” says Dan Gunn, executive director of VIATeC. “This is the 13th anniversary of the awards, and interest remains very high – not only in nominating the innovative individuals and companies who make our sector strong, but in attending the awards to connect with the movers, shakers, doers and makers in Victoria’s imagination economy.”
VIATeC (Victoria Advanced Technology Council) is an organization that connects people, knowledge and resources to grow a successful technology sector in Greater Victoria. It was founded in 1989 to promote and enhance the development of the local advanced technology industry. With only a handful of known technology companies, the ambitious mandate to facilitate the development of our region as a global centre of excellence for advanced technology was set.
Today, the Greater Victoria tech sector has grown to over 900 known technology companies, employing more than 15,000 people and generating in excess of $2.5 billion in annual revenues with an economic impact of over $3 billion, making advanced technology Greater Victoria’s #1 private industry. The winners of the 2014 VIATeC Technology Awards are:
Technology Company of the Year: CAMACC Systems
Emerging Technology Company of the Year: Red Brick Media
Executive of the Year: Tammara Kennelly – FriesenPress
Innovative Excellence: AML Oceanographic
Strategy of the Year: PlusROI Online Marketing
Product of the Year: Go2mobi
Team of the Year: Tutela Technologies
Employer of the Year: KANO/APPS
Start-up of the Year: TinyMob Games
The Colin Lennox Award for Technology Champion: Owen Matthews
VIATeC Member of the Year: Limbic Media
Education Champion, two winners this year are:
1. Danita Stewart – School District 62 Sooke
2. Jake West – Pacific School of Innovation and Inquiry