I hired my first commission-only sales team some 20-odd years ago with the misguided belief that it would be easy.

After all, I had managed several corporate sales teams and, in spite of having to deal with a few prima donnas, some lazy reps, and the occasional very dubious character, I had fared pretty well.
What I didn’t take into consideration was that there is a world of difference between a team of professional salespeople earning decent salaries and bonuses and the commission-only variety. There I was running a company selling greeting cards and in dire need of a sales team but with no money to pay them.
I asked several of my customers to recommend freelance reps and, several weeks and many interviews later, I had a sales team of 10 good people of sound body and mind. True, they weren’t all mine and carried several other companies’ products, but they would soon realize that my line was superior. To cut a long story short, the results were disappointing. Some sold a little here and there, a few I never heard from again, and one turned out to be a cardboard cut-out (just joking).

A few months after I cut the ties with the last of my mind-numbingly poor sales team, I was at a trade show and wandered up to the booth of a well-established competitor who was known to have a great commission sales team. I thought, what the heck, and asked him to share the secret of his success with me. He said, “Sure, it’s really quite simple.”
What I was about to hear, I was sure, would pay for the cost of the show ten-fold. “It’s like this,” he said, “You hire 10 sales reps and, after a year, you fire nine of them and hire nine more. After another year, you fire eight, keep the best one, and hire eight more. You keep doing this, and you’ll have a team as good as mine. Of course, then the rep that’s been with you for 10 years is ready to retire!”
So, what is the most important thing I’ve learned about hiring salespeople? It ain’t easy! I can’t guarantee that the following tips will provide you with the perfect salesperson, but it will increase the odds that you get someone who will help rather than hinder your business. Great salespeople are rare. Most underachieve. The majority just get by, and the shining stars are few and far between.
If you own your company, you are without doubt its best salesperson. The bottom line is that your passion and belief in your product and service are second to none, so don’t expect anyone to sell as well as you do. Ask yourself why you are hiring a salesperson. Should you consider hiring someone to help you with other responsibilities to free you up to do the important job of selling?
Think long and hard about what type of salesperson you are looking for and what you can afford. Are you looking for someone to cold call, tele-sell, or to build customer relations? Are you looking for an inside or outside sales person? All this will influence the type of person you are looking for.
How are you going to pay this person? There are several options: salary only, base salary plus commission, commission only with an advance, or straight commission. What’s best? Well, it all depends. The best and worst salespeople are commission only. This sounds contradictory, but if a salesperson isn’t very good, then someone will always be willing to pay purely on results because there is nothing to lose — except all the time that has been invested in training. The very best salespeople choose to be on commission because they can earn more that way: if they are taking all the risk, then the commission rate will be higher. Unless you know a star salesperson, it’s probably wise to avoid hiring a commission-only salesperson. The biggest problem is that if you aren’t paying them a salary, you don’t employ them and you have less control over when and how hard they work. So, try to budget for a base salary with a commission percentage that, with hard work, lets the person earn a good income. Don’t be cheap, but do tie performance to income.
Don’t be afraid to pay a good salesperson a lot of money. For a three-month period in 1979, working on a base-plus commission, I earned more than my managing director. He was fine with my earning more than him, especially as it was only for a few months! More recently, in a similar situation, my boss couldn’t live with the fact that he was paying me so much and let me go. That was a dumb decision. Never be concerned about paying salespeople big bucks if they are meeting and exceeding their targets.
The only really good salespeople are those who love to sell. My mom used to say, “don’t try to make a silk purse out of a sow’s ear.” This bizarre saying sums up the mistake many business owners make when hiring someone who really isn’t a true sales professional. At the end of the day, you either have to hire a proven salesperson, or someone who actually loves to go out and meet people and sell to them. These people do exist: they may need some training, but they are out there.
Just hiring someone and leaving them to it is a recipe for disaster. Unless you find someone who lives for selling, you are going to have to monitor their every move. There are 101 things to do that are easier than selling, such as checking email, planning the next sale, cleaning up the database, designing promotional literature — the list goes on. Create a reporting structure that allows you to see how many calls they have made weekly and what their closing rate is. Meet with them at least once a week and review their progress. Provide extensive training in both the products and services you expect them to sell and in the art and science of selling. I once got a new job as a sales rep when I was in my twenties and, on my first day at head office (200 miles south of my territory), I asked my manager about training. He pointed his finger and replied, “North is in that direction.”
Put all new hires on probation for four to six months. Without question, it will take you several tries to find someone who can actually sell at the level you need them to. If, and when, you discover a true star, someone who has your passion and belief in your company, consider giving them a share of the company. Get them invested in your future by making them a part of it. 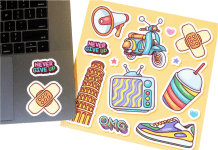 6 Clever and Cost-effective Ways to Promote your Brand Now