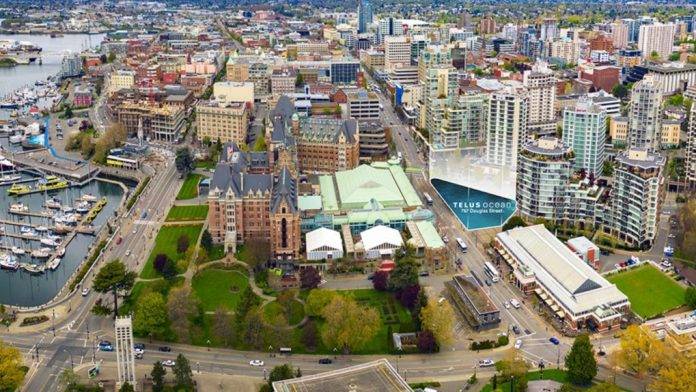 The City of Victoria has announced a proposed commercial office and retail development in the downtown core for TELUS Communications Inc. The development, dubbed TELUS Ocean, will be built on the southeast corner of Douglas and Humboldt Streets, a city-owned 27,790-square-foot triangular vacant parcel that was created as part of the original infilling of James Bay in the early 1900s.

It will become TELUS’s regional headquarters for approximately 250 employees as well as home to an innovation hub for advanced communications and information technology.

A portion of the development will also include commercial office space for external tenants, retail and restaurants, as well as programmed events and gatherings.

TELUS is working with Victoria-based Aryze Developments as a community development partner. The Aryze project team will lead the project architect and consultant teams, with community engagement expected to begin in late June. Following that, TELUS will submit a land use application to the City’s planning process.

This agreement completes a competitive proposal process for the Apex site launched by the City of Victoria in early 2017. Of the six submissions received, the TELUS Ocean proposal scored highest.

The City’s main goal was a major commercial development that would anchor the southern end of Douglas Street and advance one or more of the City’s key economic engines, such as technology and innovation, create high-value jobs and diversify the economy. High-quality architectural and sustainable design appropriate for this prominent location and surrounding neighbourhood were among other goals sought.

TELUS has agreed to purchase the property from the City of Victoria for a price of $8.1 million, plus up to an additional $1.1 million purchase price adjustment depending on the final proposal submitted and approved as part of the rezoning process.

The proceeds from the sale will be held in the City’s Tax Sale Lands Reserve and will be used to fund actions in Victoria’s Strategic Plan, including acquiring land for affordable housing.

City of Victoria Mayor Lisa Helps says “TELUS Ocean will help us to build a stronger, more resilient economy. It is another example of the confidence leading companies are showing in moving to Victoria or expanding their operations here. It will create significant long-term economic and community benefits, pump added vitality and diversity into the heart of our downtown commercial district and support hundreds of new family-sustaining jobs.”