Ask Bruce Williams, CEO of the Greater Victoria Chamber of Commerce, what he sees for the future of small businesses in our community, and he replies drily, “We’re constantly surprised, I can tell you that.”

On the one hand, things look rosy. “In general, everyone is on the path to recovery,” Williams says. Tourism is back, restaurants are busy, trades are booked for months in advance. In fact, Victoria recently topped Resonance Consultancy’s list of best small cities in Canada (population under 200,000), earning high marks for its booming economy, well-educated population and robust number of creative workers.

On the other hand, businesses are still dealing with the fallout of the pandemic — which, of course, isn’t over yet. Three years after the first case of COVID-19 emerged across the Pacific, local business owners are struggling with a brutal labour shortage, endless supply-chain issues and the rising cost of borrowing money, even as we enter what is expected to be another virulent season for respiratory illnesses.

“These are issues that are affecting everyone,” Williams says. But they affect small businesses the most.

In 2021, according to Statistics Canada, 98 per cent of all employer businesses in Canada were those with 100 or fewer employees, and they employed 10.3 million people, almost two-thirds of the labour force.

But in StatCan’s Canadian Survey on Business Conditions, conducted in January/February 2022, those small businesses were more likely to have lower revenues, lower sales, lower profitability and higher financial constraints than medium or large businesses. And that was before the Bank of Canada began raising interest rates in April.

So what does all that mean for you and your business?

“I think everyone is taking a pretty hard look at what they do: What can I do differently and what can I do the same?” Williams says. “Everyone is readjusting.”

As anyone who has tried to make a dinner reservation, book a contractor or hire an employee knows all too well, the labour shortage is an ongoing crisis.

In StatCan’s second-quarter report, 68.6 per cent of entrepreneurs indicated that staffing was more challenging than during the past 12 months. Stuart Bergman, chief economist and vice-president of Export Development Canada, says it may take years, even decades, to fully fix the problem. “Solutions are tough,” he says.

They are difficult because the problem is so complex. There is no single reason for the labour shortage, but a combination of early retirements, a slowdown in immigration and a tsunami of workers changing jobs, moving to other communities or staying home to recover from or avoid catching COVID, have created challenges.

“Labour will get some support with post-secondary students coming back, and immigration will become more focused,” Williams says, reassuringly.

Still, he notes that one of the biggest challenges is that all the late boomers and early Gen-Xers are retiring early, “taking all their experience and equity with them.” Even if an employer can find a replacement, that individual will almost certainly need some training.

Helping potential employees upgrade their skills will help keep the economy buoyant, says Julie Sperber, the new president and CEO of the Vancouver Island Economic Alliance. “Absolutely,” she says. “Training and skills development — [we need to] get government support for that.”

One option is the trend of “micro credentialling,” in which post-secondary institutions offer short-term learning opportunities that align with labour market or community needs. “This gets people into the workforce now,” Williams says.

Another option is to open the doors to more immigration. But that, too, is easier said than done. As Bergman points out, “We have to make up for two years of closed borders overnight.” And now we’re competing with the rest of the world — even China is struggling with a worker shortage.

One of the biggest roadblocks is Canada’s reluctance to recognize credentials from other countries. Health care and engineering especially are two professions that are in high demand, but the process to approve qualified workers from overseas is overwhelmingly onerous and requalifying is an expensive, labour-intensive, multi-year process. “We would do well to speed that process up,” Bergman says.

The other major factor — especially here in Victoria — is the high cost of living in paradise. “We’ve been losing work force to other regions because they can’t afford the cost of living. They’re moving back to Calgary or Australia,” Williams says.

It’s why the provincial government has capped allowable rent increases for 2023 at 2 per cent and is encouraging construction of higher density housing. After all, without places for workers to live, there won’t be anyone to serve the tables, care for the patients, repair the roads, police the streets or fulfill all the other roles in a community.

“We [the Chamber] are in favour of anything that provides affordable housing,” Williams says.

Even if business owners can find the staff they need, they still have to deal with supply-chain issues.

“The economy came back faster than we thought, but the demand on supply chains hasn’t caught up,” Williams notes.

Back during the height of the pandemic when we were all furloughed and doom scrolling at home, many of us became avid online shoppers. Unfortunately, that coincided with COVID-related factory closures as well as shipping delays, driver shortages, increased freight and fuel costs, bad weather, depleted inventory levels and a myriad of other factors. That resulted in everything from avocados to automobil being back ordered and delayed.

Even so, the Amazon Prime delivery truck has become a regular feature of city streets.

“In the big picture — and this is a conversation we’re just starting to have — in terms of supply, maybe we need to look at demand,” Williams says. It might be time, he says, to give up our love of cheap goods and instant gratification, and invest in quality rather than quantity. “It’s very easy to shop from home,” he adds. “And maybe we need to take a second look at that.”

There has been a positive aspect to all of this, however. “People are re-examining their consumer habits, and there has never been a better time to buy locally,” Williams says.

He notes that local businesses sell clothing, books, housewares, foodstuffs and other goods. “It might cost a little more, but it’s keeping money here with people who are your neighbours and friends,” he says, pointing out, “We have companies in town who will deliver, just like Amazon does.”

And It’s the Economy, Too

The supply shortages have led to higher costs, and even “cheap” isn’t so affordable anymore. Lumber, for instance, has become enormously expensive. “Two-by-fours aren’t cheap anymore. Plywood isn’t cheap anymore,” Williams says. And good luck buying a car — even the price of second-hand vehicles has gone through the roof.

All of this, combined with soaring costs for labour, housing and energy, has resulted in inflation, which is at a 40-year high. In Canada, the inflation rate was pegged at 7.6 per cent year-over-year in July. Bad as that is, it could be much worse. Among G7 countries, the U.K.’s inflation rate was 10 per cent in July and forecast to hit 13 per cent by the fourth quarter. Meanwhile, it’s even higher in economically troubled countries like Argentina (51 per cent), Lebanon (200 per cent) and Venezuela (1,198 per cent).

The solution, so far, has been a series of key interest rate increases by the Bank of Canada. “That’s a surefire way of slowing down people’s spending right there. That slows down inflation in a big way,” Williams says. However, higher lending rates will force employers to reassess the cost of doing business and make hard choices about where they spend their money, affecting them “in their ability to operate at their fullest capacity.”

It is already resulting in a shift in consumer habits. As Williams points out, “If you can’t afford to buy the stuff you used to buy, you’re just not going to buy it.”

All of this affects businesses, especially small businesses. One positive is that we have all been forced to truly understand how our complex, globally connected economy works. Another is that businesses became adept at pivoting during the pandemic, and are better placed to survive another pivot, or two or three.

“People are adjusting to things, and we’ve had the chance to take a really close look at how our economy works, because there isn’t anyone who isn’t affected,” Williams says. “It’s been a transformative time in the economy.”

If small businesses are looking for ways to be more efficient, they need to turn to technology. “Everyone has to look at how technology can support them and help them be more effective,” says Bruce Williams, CEO of the Greater Victoria Chamber of Commerce.

In its recent study “Seize the Technological Advantage,” the Business Development Bank of Canada (BDC) reports that, while 91 per cent of Canadian small- and medium-sized enterprises invested in technology in 2021, only one in 20 businesses use digital technologies effectively.

According to the BDC, “digitally advanced businesses perform better: they grow faster, are better able to adapt to a changing environment, get the financing they need and are more likely to export.” This study also found that digital maturity is unevenly distributed across industries, noting: “The retail sector went completely digital during the COVID-19 pandemic, while the construction and services to individuals sectors had the least investment in 2021.”

And new business owners are more likely to be tech savvy. According to an Intuit QuickBooks study, 16 per cent of Canadian small businesses opened in the last year, and 50 per cent of their owners advertise on social media, compared to 35 per cent of established owners. Of the businesses using social media, nine out of 10 respondents feel it is an effective tool.

Inflationary Woes on the Rise

On a positive note: Over the last 12 months, 74.7 per cent of local businesses directly sourced their products or supplies within Canada, and more than three-quarters of those supplies came from B.C. 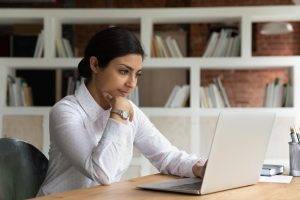 Whether you’re just starting out or in mid-career, every small business owner could use a little help from time to time. Here are four handy links that offer the help you need just when you need it most.

LinkedIn Learning
LinkedIn is more than a networking site. It also offers professional development through its subsidiary, LinkedIn Learning, which features dozens and dozens of video courses taught by industry experts in software, creative and business skills.

Work BC
Looking to hire? Need help with your business plan? Want to improve your skills? This site has the resources, tools and information you need — and boasts the most comprehensive database of B.C. job postings as well as a live chat function.

Downtown Victoria Business Association (DVBA)
The DVBA is all about supporting  Victoria businesses, mainly by offering financial assistance through various grant programs. Got a great idea? You might be able to get it funded.