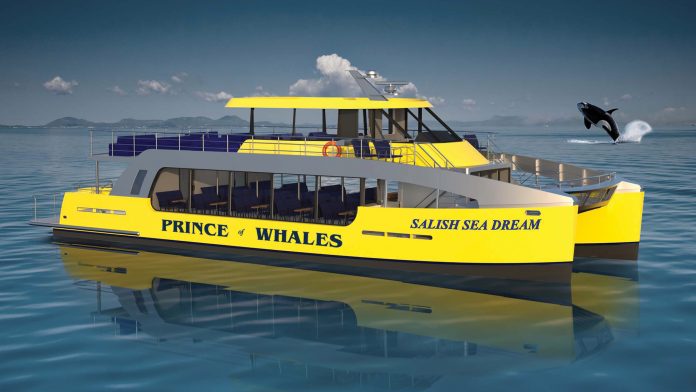 A luxurious new purpose-built whale-watching vessel will have its maiden voyage in June when Prince of Whales, a Victoria-based whale-watching operation, launches the Salish Sea Dream.

The 24-metre vessel, designed locally by Gregory C. Marshall Naval Architects and built by Armstrong Marine of Port Angeles, will carry up to 94 passengers and their luggage. Interior and exterior seating will allow Prince of Whales, which already has 12 vessels and 75 peak-season staff, including four certified naturalists, to extend its operations into the shoulder seasons, from May through October.

The new tours, originating from both Victoria and Vancouver, include an Ultimate Day Tour, a Butchart-Gardens-to-Vancouver tour and more. One of the tours takes passengers through Sansum Narrows and Porlier Pass, areas previously only accessible by private boat.

“As an adventure boat, the vessel is meant for people who want to go well off the beaten path,” says Alan McGillivray, who founded Prince of Whales in 1995. “It’s for those who want to be up and about and looking at things from the decks, having an adventure and seeing wildlife.”

The new vessel, says McGillivray, reflects a growing customer base eager to learn about the oceans and state of the earth. “Many of our customers’ only concept of the ocean,” he adds, “is a big blue open space.” And that’s a perspective he’s passionate about changing.