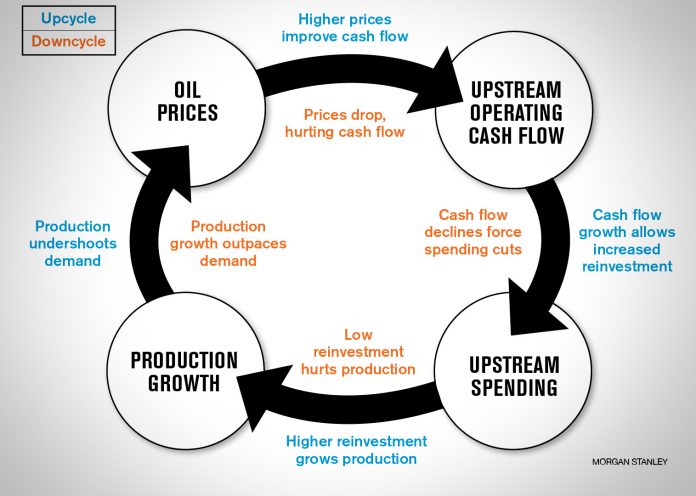 We’re currently living through one of the worst energy boom and bust cycles ever faced by governments, investors and consumers. The past few months have seen oil prices fluctuate wildly, and while we might like the result at the pumps when prices fall, some of the other effects are causing anxiety.

In the past year, the effects of rapidly changing oil prices have affected Canadians in a mostly positive way unless you own real estate in parts of Alberta, Saskatchewan and B.C., or energy stocks/mutual funds in your investment portfolio. However — and this might be a hollow victory — some of us have seen modest savings on our credit card payments and improvements in our chequing/savings accounts at the bank. So what happened?

Why Prices Rise and Fall
In a word: technology. There is an old saying in the oil industry: the cure for high oil prices is high oil prices and the cure for low oil prices is low oil prices. When oil prices rise, it induces oil companies to increase production by exploiting new deposits that were uneconomic at lower prices. Eventually, this creates a situation in which supply swamps demand, leading prices to fall. Likewise, when oil prices fall below the cost of producing and refining it, oil wells get capped and total supply shrinks relative to demand and prices rise. But it’s different this time.

According to OPEC’s 2014 World Outlook for Oil, the current global demand for oil is just over 91 million barrels per day and it is expected to rise by about a million barrels per day per year for the next five years with possible minor economic hiccups. Unfortunately, according to OPEC global oil supply is expected to  exceed total demand over the next five years and  here’s why.

At the end of the last cycle peak in 2008, when oil prices hit US$125 per barrel, a technological revolution was taking place on the exploration side of things in North America. Previously identified oil reserves locked in high-cost geological structures were getting drilled, tested and brought online. The new process used directional drilling techniques combined with high-pressure hydraulic fracturing techniques to unlock trapped oil and gas. A well would be first drilled vertically into a deep underground zone and then the drill bit would be rotated 90 degrees and drilled horizontally for up to 2,000 meters. The horizontal portion of the well would have a series of holes blasted through the pipe and then large volumes of water would be forced down the well under tremendous pressure causing the surrounding rock to fracture and unlock the trapped oil and gas. The water would then be pumped out of the ground and the trapped oil would then flow up the well.

The Flow of Wealth… and Worry
Previously inaccessible oil deposits are now flowing at an incredible rate. For example, the giant Bakken shale oil deposit located in North Dakota, Montana and Saskatchewan dramatically highlights the success of new horizontal drilling and fracking techniques. Production from this region has skyrocketed. The North Dakota Industrial Commission recently reported that in their state alone there are now over 10,000 wells producing over 1.1 million barrels of oil per day. At the end of 2007, that figure was 446 wells producing just over 33,000 barrels of oil per day.

Unfortunately, this has created a problem in global oil markets. As a group, OPEC is the world’s largest producer of oil and, since 1973, they have used their near-monopolistic abilities to influence prices by increasing or decreasing the production (supply) of oil to meet world demand.

For example, when demand for oil plummeted after the 2008 financial crisis (demand destruction), OPEC members led by Saudi Arabia got together in December and cut production by 4.2 million barrels per day. In previous cycles, this reduction in supply would have likely resulted in prices rising back to a pre-established trading range of $90 to $100 per barrel, but the strategy did not work this time.

The exponential growth of horizontal drilling and fracking in Canada and the U.S. effectively negated the production cuts by OPEC. To make matters worse, this surge in production coincided with major geopolitical events that have continued to hamper the stability of price, supply and demand.

Position Yourself to Benefit
So what are the net effects and how should consumers and investors position themselves to best benefit from the new energy paradigm?

First, if you are a consumer, the typical pattern of energy boom/bust cycles are very “V” shaped. In other words there is a tendency for prices to fall rapidly (60 per cent) in six months followed by rapidly rising prices. (It could be different this time; a 50 per cent rebound is a reasonable guess.) Therefore, stay cautious and ignore the desire to buy large, gas guzzling vehicles because prices at the pump appear cheap. Instead, take the savings and either pay down debt or invest the savings.

For investors, high-cost, high-debt companies need to be reviewed. Rebalance your energy exposure and make sure you are investing in low-cost producers of oil and gas, especially ones that can grow their production in a low-price environment. Lastly, consider the midstream players, those companies that handle the product from the pipeline to the refinery. Regardless of the price of the commodity, volumes will continue to move through the system and midstream players will benefit.

Steve Bokor, CFA, is a licensed portfolio manager with  PI Financial Corp, a member of CIPF.