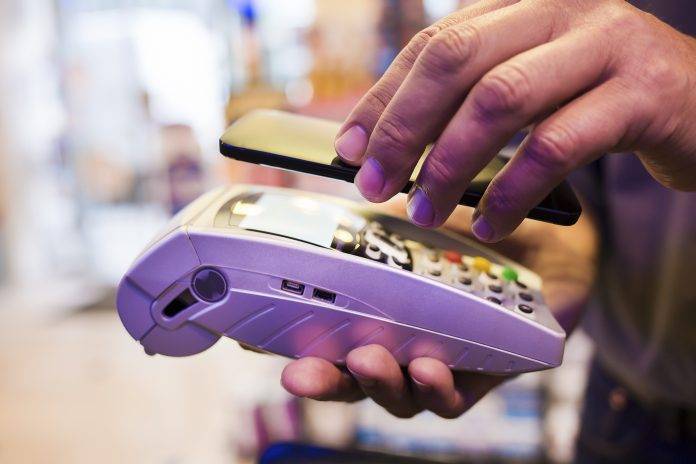 Near-field communication (NFC) is coming soon and there are some compelling reasons why you may want to consider it for your business.

Having first-mover advantage on NFC could really pay off for the early adopters, as customers will find it very easy to pay for purchases — and don’t you want to encourage that?
Add in faster-moving lineups, and customers will have more reasons to choose you over your non-NFC competition.
The Mobile Payment movement
NFC is a short-range wireless transmitting technology that connects a smartphone with a receiver (usually attached to a cash register) to transfer data. Although it offers huge potential on many levels, the first — and likely the most significant — benefit is with mobile payments. This payment method is easy and cheap so customers should take to it quickly. If you add other offerings such as coupons, loyalty rewards, and other services, you could see a very quick ROI with NFC.
Much like cost overruns on a new bridge project, it appears mobile payments are inevitable. The general consensus is that  NFC will become the mobile payment standard.
Starbucks’ CIO Stephen Gillett has gone on record saying he expects NFC to become prominent as mobile payment technology advances. Starbucks is a pioneer in this area: currently, you can put your Starbucks payment card on your iPhone, which generates a bar code accepted as payment.
Check Your Timing
Many times with technology like this, there is a chicken-or-egg dilemma: merchants don’t want to outlay costs for technology that is not yet in heavy use, and then be stuck with a “Betavision” if a VHS is just around the corner. Consequently, consumers cannot embrace the technology if merchants aren’t offering it.
It’s clear that merchants will be the laggards, as consumers are carrying the technology now whether they know it or not. At the time of writing, Apple and Android do not yet offer NFC on their phones, but BlackBerry and Samsung do. Yes, go back and read that again: RIM is offering something Apple isn’t. But consensus is that the iPhone 5 will have NFC. So if it’s already on some phones, and Apple and Motorola are adding it soon, its exposure will encompass the majority of smartphones.
{advertisement} Strategically Smart
If you are a merchant that does a lot of quick, low-cost transactions (coffee shops in Cook Street Village: are you paying attention?), it would be smart to adopt this early, make transactions more convenient, and speed up how quickly you can collect revenue.
Like most things, there will be some challenges with the introduction. One challenge is the lack of clarity on how billing will be handled. If you buy a coffee with NFC, should the charge be handled by a bank, a credit card company, or a cell-phone provider? I can’t be the only one who thinks Telus, Rogers, and Bell would not be drooling to get more charges on your cell phone bill. The model used in Japan favours charges handles by cell phone providers.
What You Don’t Know, and Should
Security is, of course, a risk, but not much more than where we are today. Mobile banking is growing, and most people already have personal information on their phones.
If you think that consumers will say “no thanks, too risky for me,” I have bad news for you. Most Canadians are already carrying NFC’s cousin in their wallets. Many (if not the majority) of credit cards have an embedded computer chip called a radio frequency identification (RFID) chip. When waved near a payment terminal in a store, the RFID chip supplies the card’s number and expiry date through radio waves, eliminating the need to swipe the card or sign for it.
There is almost no limit to where this technology can go. It could be used to unlock your car, and can even be adapted to give you access to your hotel room. BlackBerry is experimenting with syncing to car software to enable hands-free calling, seat and mirror positioning, and more. Samsung has demonstrated that an NFC phone can unlock a “smart” deadbolt. Even the Royal Canadian Mint is experimenting with a payment service called MintChip. If the federal government is getting on board, it’s safe to say NFC is not as far away or as risky as some may think.

Doug Caton is an IT Manager in Victoria.