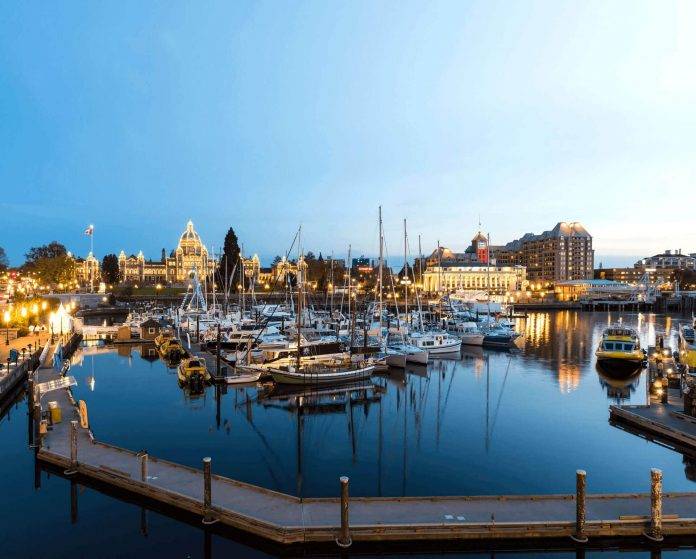 There’s a fresh face on the waterfront these days as Curtis Grad settles into his new position heading up the Greater Victoria Harbour Authority (GVHA).

The Saskatchewan-born Grad has enjoyed a career in airport development and management that’s taken him all over the world. He’s working in a new element now after taking the helm at the harbour authority in June, but says harbour and air services have much in common.

The harbour authority was born in 2002 in the midst of the federal government’s divestiture of waterfront assets. Grad says its efforts have already brought relief to “distressed facilities” at Ogden Point and Fisherman’s Wharf, and built a more stable financial base for the not-for-profit authority. In December, the GVHA’s bid for the old CPR Steamship Terminal was successful — it’s a key property in the authority’s long-term plans for the harbour.

But much work lies ahead. A revamp of Ogden Point is in the works. Bringing harbour properties into compliance with City of Victoria bylaws — something the federal government never got around to — is also a major item on the authority’s 2012 to-do list.

Grad and his wife Sally Jung-Grad had been abroad doing international work for more than eight years when the opportunity came last summer to lead the harbour authority.

“Had the harbour issues all been resolved here, it might not have been that interesting to do this work,” says Grad. “But I see a real opportunity to do something I can be proud of later. If you can do something great, why not?”

You went from air to ocean when you stepped into the harbour authority. Do the air and harbour industries have much in common?

Every day that goes by, I find more commonality. Airlines and cruise lines are very similar in what they do — it’s about markets and how to serve them. Luxury yacht or private corporate jet, you’ve got an affluent customer who expects good service. You’ve got a very engaged public in the neighbourhood, and similarities around commercial leasing. And ultimately, they’re both about people and relations.

{advertisement} What are the differences?

That’s more to do with Victoria in particular. The harbour here is vested right in the community. The lines between the harbour and the interface are very blurred. A lot of other harbours are out at more of a distance from the city, as are most airports. That’s not the case here. Community engagement is what we need to be doing in Victoria.

What do you envisage for the CPR site?

Our vision is to use the CPR building to anchor a larger, more comprehensive plan for the harbour. The key for us is returning that building to public access. For the last 40 years, it’s been pay-on-entry. We want a more open, welcoming place with food, public amenities, office space. The idea would be that when you depart from Victoria on the Clipper or the Coho, you’d walk through the CPR terminal and then into a new, consolidated terminal.

The harbour authority has inherited some challenges — the need to upgrade Ogden Point, community pressure to reduce emissions from cruise traffic, a difficult economy. What are 2012’s priorities?

Some things were in the works when I arrived, like the Ogden Point master plan. We’re wrapping up the technical report on that, looking at what the harbour is physically capable of. The next phase looks at market — what does the market want to bring us? Then comes rezoning. The federal government didn’t have to obey local regulations, but we have a mandate to do that, and we’ll be getting ready for that in 2012.

What would your dream harbour look like for Victoria?

The first thing I’d love would be a harbour-wide master plan, from Ogden Point right to the Point Ellice Bridge. Everyone would be involved in thinking about how to use these facilities to their best. The dream is that we’d all be working off the same page. I’d like to see a more rational use of the facilities we have around the harbour.

Your most recent job was in Amman, Jordan. What kind of work were you doing?

I was there for three years, working as the CEO of an international consortium that was renewing the old airport built in the 1980s by King Hussein. The new king put it out to tender, and the consortium put in a $750-million bid. Before that, I did similar work in Larnaca, Cypress, and before that, Montego Bay in Jamaica. The fun part for me was figuring out facilities that had opportunity but not necessarily the ability to capitalize on it. When you come into a foreign country, you’re a guest — you need to listen, and understand that the solution is going to be specific to that area and those people. There’s an opportunity in Victoria to do the same thing.

You want to consolidate some of Victoria’s eight harbour terminals: three at Ogden Point, two floatplane sites, two for ferries, and one for helicopters. What are the benefits and how will it happen?

If you fly through New York City, there are nine different terminals operated by nine operators, and they don’t necessarily work in the best interests of the community. We’ve got a smaller version with eight — a lot of redundancy in land use, utilities, electricity, and not necessarily the best quality or capacity. But we’ve got to take things incrementally. The first is for the harbour authority to address the issue on our own property, Ogden Point. The CPR terminal is another opportunity. I think it’s about identifying opportunities and stepping up to the plate.

What are the secrets to getting things done with as many stakeholders as the harbour authority has?

Patience and persistence. You have to take the time to talk to people, and put yourself in their shoes. Cruise traffic, for instance: 60 per cent of the revenue the harbour authority earns in a year is from cruises, but 400,000 people visiting a community are going to have an impact. I know we have to balance the impact of traffic with the huge economic impact.

The GVHA and the Provincial Capital Commission both control various harbour properties downtown. How do you two manage your relationship?

It’s been a pretty sound and mutually beneficial relationship. If you look at the properties on the Causeway, there are a lot of imaginary lines between us, the PCC, and the City of Victoria. By and large, the average person doesn’t know they exist, which is great. I think we could look at things like the continuity of lighting, the street scene, the way buskers are presented so that it’s consistent.

In B.C., you’ve worked in Nanaimo, Abbotsford, and now Victoria. How does Victoria compare for getting business done?

I’m pleased with the progress we’ve made in these few months. It starts with your team, and I like our management team. And stepping out into the community, I’ve been well-received. As an outsider, you’re not constrained by history. You can have a different perspective and people seem open to that. But you have to be sure to find ways to make things happen before you lose that fresh perspective.