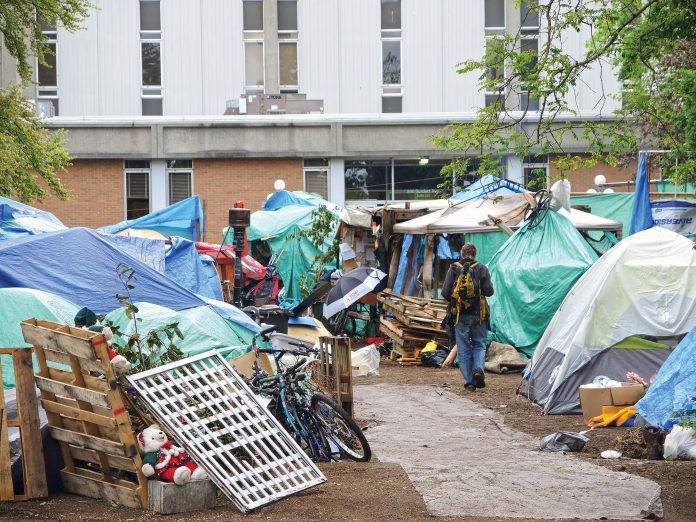 With the summer season here, emotions are heating up over the tent city that has risen up on a small corner of a city block, on provincial land adjacent to the Victoria Law Courts. Emotions span the spectrum: Despair. Curiosity. Pity. Frustration. Disgust. Sympathy. Mad as hell. But one sector that has been notably quiet on the issue of what to do about the tent city is local businesses.

Over the months, as the camp has grown, the business sector has been largely absent in public debate. The reason, says Bruce Carter, outgoing CEO of the Greater Victoria Chamber of Commerce, is “the more you talk about it, the worse it is for business.”

As well, some individual business owners fear reprisals from tent city residents or poverty advocates if they speak out, Carter adds, pointing to the incident in April where a 16-year-old organized a protest on the lawns of the Legislature only to be confronted and drowned out by tent city supporters.

“Everyone is allowed to have an opinion and perspective. When advocates for something take the position of trying to crush someone else’s opinion, we have lost our way as a community and society. It is a respected dialogue around options that leads to good solutions.”

But after months of the Chamber quietly working behind the scenes “putting pressure on all the relevant players,” Carter is speaking out on behalf of business because his office has been inundated by its members with demands to talk about it.

“Businesses aren’t feeling supported by anyone. By council. The province. Or the courts. They are feeling left to languish and told not to say anything, told to increase sales but feel like they have no input and no rights. If you talk to residents in the area, they would feel that way too … We don’t feel respected.”

Carter says the impact of the tent city on downtown businesses is very real, driven by the increased concentration of homeless people in one pocket. “It has increased the amount of vagrancy, panhandling and property damage in the area and downtown.”

Nursey told council he was “very reluctantly” commenting on the negative impact the camp is having on businesses yet commended the City for its “hard work and compassion on this complex issue.”

Asked later if he felt the City and mayor were supporting business, Nursey said in a statement: “We have full confidence in the Mayor of Victoria and know she is working with the provincial government to bring order to the site and ensure surrounding neighbourhoods are safe.”

As for damage to Victoria’s reputation, Nursey wrote,  “As an organization that cares deeply about our city and its reputation around the world, we don’t want to ignore the situation, but we also don’t want to exaggerate it.

“The encampment is limited to one city-block on provincial land around the courthouse and does not broadly affect downtown, the Inner Harbour or areas frequented by tourists. We are confident visitors will have an excellent and safe experience in Greater Victoria.”

Meanwhile, Mayor Lisa Helps takes issue with any suggestion the City isn’t supporting businesses, pointing out that she sent a texted meeting invite to two downtown merchants as they were presenting their concerns at a recent council meeting.

“I shouldn’t likely be texting during the meeting,” says Helps, adding she couldn’t stop herself from “immediately leaping to action.”

As well, the City has requested that Victoria police deliver crime prevention information to Fort Street merchants, and on May 20, Victoria council voted to increase the police budget by $113,000 to allocate more police presence for the tent city. Helps says the City continues to work with the Province to get the encampment closed.

The mayor does agree that “amplifying” the issue will damage Victoria’s reputation without producing anything constructive. “This is my biggest concern and my biggest frustration. Yes there are challenges, but there are challenges in every city across the country” she says, citing diminished spending on affordable housing by the federal government since 1989.