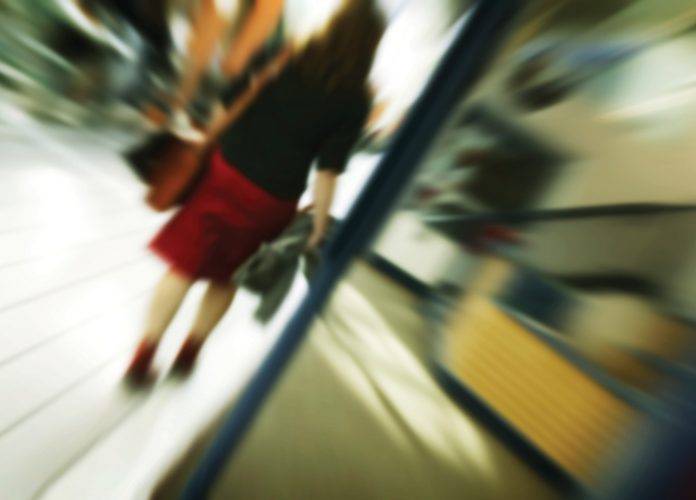 Shoplifting sucks billions of dollars every year from the Canadian retail industry and causes stress and fear amongst retailers and their employees. Douglas talks to concerned Victoria merchants who are struggling to find solutions to a chronic problem.

Some downtown Victoria merchants say a “very bold and persistent psychotic kleptomaniac,” who has been regularly shoplifting over the past year, is costing them thousands of dollars in losses. Handbags, athletic wear and cosmetics have all been deftly removed from shops without payment.

Frustration would best describe how many store owners and managers feel about the situation, especially when they believe they’ve seen the woman shamelessly parade stolen goods on her person days after they’ve been lifted from the store. Others say they have seen some of the goods being sold at local swap-and-shop markets.

Freni Waidelich, store manager for Heart and Sole Shoes, does not hold back when expressing her exasperation and concern about the situation: “She has been bullying [Fort Street boutiques mostly] for over a year … and, although known to police, she doesn’t care and wears the item that day or the next and blatantly flaunts herself up and down Fort Street.”

In Search of Solutions
The situation is frustrating to merchants and their staff, but it’s also a concern to police, according to Constable Dan O’Connor, Victoria Police Department’s downtown community resource officer. He notes that police appreciate the concerns of store owners but they need exacting information that would support laying charges. For instance, the police cannot act on hunches. You must actually see the suspect conceal the item, be able to identify the item, be able to identify the suspect and describe how the entire theft took place. For information about the legality of detaining shoplifters and tips to ensure you are a good witness, merchants should contact their local police department.

It’s important that police get reports about incidents at the time they happen and with strong documentation behind it, says O’Connor. It’s not good enough to hear a month later that “she’s wearing the [stolen] pants right now.” Her wearing the pants right now, with no serial number attached to the pants won’t be enough evidence to support charges that could hold up in court.

O’Connor says he’s working closely with the merchants to help find strategies to prevent the shoplifting and pull together sound documentation that could pave the way to charges. He notes that police are also offering merchants advice on how to handle situations involving threatening behaviour by shoplifters.

That’s key for the Fort Street merchants who also fear their persistent shoplifter has an unstable personality with a violent tendency, acting paranoid if clerks follow her around. Frontline staff worry that if they confront the woman she’ll become aggressive, and there are reports that she has threatened at least one clerk.

“Often, it is just us girls in the store and it is up to us to manage it,” says Waidelich. “You have to put yourself in this horrible position. It feels like we are being bullied by this person.”

In the case of threatening behaviour, says O’Connor, it’s essential for those on the frontlines to call police for assistance and to never engage with potentially dangerous people on their own.

A Persistent and costly Problem
While not all shoplifters are a danger to shop owners or their employees, their actions can be devastating for the health of the business. According to Stephen O’Keefe, an independent consultant who conducts surveys for the Retail Council of Canada, the most recent statistics indicate that shoplifting costs the Canadian retail industry $2.05 billion in profit losses (or “shrink,” as the industry refers to it).

O’Keefe says there’s no evidence that shoplifting is on the rise, but there is more awareness and sharing of information. In the case of organized crime, he says, “retailers are getting better about connecting the dots. Police are getting better about connecting the dots and we hear more about them. When people read about this, they think organized retail crime has gone up. It hasn’t. But we are better at detecting it.”

Nor have the reasons people steal changed much; O’Keefe puts it down to three things: need, greed, and opportunity.

Retailers don’t have much opportunity to affect the first two factors, where things like poverty, addiction, peer pressure and social issues drive the perpetrator, says O’Keefe. But they can definitely take action around diminishing the opportunities for shoplifters to steal from their stores.

As an example, he talks about a client who has a horticultural business that over the years grew from selling just plants to selling garden tools. Later, the owner added a corner boutique to the business model, with gardening-themed crafts and accessories. It was then that the store started experiencing very high losses.

O’Keefe scoped the merchandising space. “I realized it was set up to appeal to the honest person,” he says. That made it an easy environment for a shoplifter to act without detection. So O’Keefe recommended moving the cash area into a circular space in the centre of the store, which permitted staff to have easy views of all parts of the merchandising area. Losses diminished immediately.

Community Concern
Teri Hustins, owner of Oscar & Libby’s, is a Victoria retailer with more than 25 years of experience under her belt. During that time she has been on the pointy end of a variety of frauds, thefts and even a very disconcerting armed robbery.

Hustins is a big believer in training staff properly to anticipate and prevent shoplifting. “A major deterrent is just greeting someone,” she adds, explaining that something as simple as acknowledgment can deter someone’s intent on stealing.

“I also tell staff to use their instincts,” says Hustins. Unusual vocabulary, loud talking or other peculiar behaviour can often signal that someone is on the prowl to steal. “The number one deterrent is attentive staff.”

Hustins also establishes a code word for staff to use when they need their colleagues on the floor to help observe individuals in the store.

How and what she merchandises is also a factor. She declined, for example, to stock some “groovy paring knives,” believing that her staff might not be comfortable with them in the store. Smaller items get placed near the cash counter.

That said, it didn’t deter someone from randomly stealing five packages of gourmet popcorn over the Christmas holidays. Why would someone risk getting caught for something of such a small value? “I have no idea,” says Hustins. “Maybe it was the thrill, or just something they wanted … But if you add up the dollar value of all the things stolen, it does not add up to being chump change.”

Hustins would agree with O’Keefe that shoplifting isn’t a bigger issue than years ago. “But we now have more ways of finding out about it and communicating with our business neighbours about potential shoplifters.”

That communication is proving to be an important tool for merchants, and Hustins has organized merchants in the Fort Street area into an informal “block watch” where members share strategies to combat shoplifting and send alerts when they believe a shoplifter is actively working in the area.

“We’ve received good advice from the [police] liaison officer,” says Hustins. “As business owners we feel so powerless. And our staff feel nervous. It’s been helpful to get some guidance on how to keep our businesses safe and our staff safe.”

“Fort Street is very well organized as a precinct,” says Suzanne Bradbury, acting president of the Downtown Victoria Business Association. She credits Hustins’ organizational capacity for this, adding that businesses can help reduce shoplifting by actively participating in these informal precincts.

Speaking of the situation with the shoplifter on Fort Street, Bradbury adds, “It is an unfortunate situation and always frustrating for businesses, particularly when it is a chronic situation … Shoplifting is a drain on talented people trying to move their business forward.”

A shoplifter’s activity essentially takes money right out of the business, says Hustins, which she calls “frustrating.” But the cost to business goes beyond that. “This is money we could use to pay a part-timer so that we can find time to be creative around growing our businesses.”

And there are bigger implications as well. As Waidelich points out, shoplifters like the women operating downtown are “costing the whole community thousands of dollars in taxpayers’ money in policing efforts.”

Being Aware
There are many steps retailers can take to help curtail the actions of shoplifters. The Retail Council of Canada has a 32-page booklet to help retailers assess their security and which notes that shoplifters come from all social classes and groups.

“You may have a middle-aged man stealing an entire shelf of shampoo, a group of teenagers stealing for a thrill or a mentally ill elderly person stealing anything she can … If you focus only on the tough-looking subjects, you’ll miss the ones who have learned to fit in. Give your customers equal attention — and you won’t blind yourself to threats.”