The closure of Wilson’s Tofino Bus route leaves communities stranded and raises questions about the role of a private company in providing accessible transportation.

The decision by Wilson’s Transportation not to resume the Tofino Bus is an immediate blow to communities who have been without the service since after the current COVID lockdown came into place in early December 2020; 21 First Nations and 29 communities rely on its service for inter-city transportation. Running at a loss, Wilson’s Transport is not in a position to shoulder the costs of the route.

This situation brings to light issues around long-term expectations for infrastructure, the chasm between private and public transport and the economic recovery of large businesses that have fallen between the cracks of government funding.

The provincial government’s recent announcement of a funding package for tourism and motor coaches acknowledges that the sector needs attention, and that it is, in many cases, very far from entering the “recovery” phase that other sectors begin to find themselves in. But in Wilson’s case conversations with the provincial government have fallen short of working towards a meaningful, tailored and quick response. “We’ve got to stop talking and get going,” says chief executive of Wilson’s Transportation, John Wilson, of his conversations with Transportation Minister Rob Fleming.

Falling between the cracks

The BC government’s tourism recovery funding of up to $45K fell short for larger-scale, infrastructure-heavy companies with overhead capital costs like Wilson’s Transport, Harbour Air, Capilano Suspension Bridge Park and Butchart Gardens — who had too many employees to apply for that funding. Other barriers to financial support have included not being in operation or an aversion to taking on more debt.

Wilson’s Transportation asked for a one‐year emergency COVID recovery contract from the Ministry of Transportation to cover operating costs for Tofino Bus and allow it to resume this essential service but has not been successful to date. They proposed financing solutions to the provincial government, a subsidy package that would enable the route to be up and running as an essential service; the initial government outlay would be reduced with every ticket bought.

“That to me was a specific fix for a specific sector of our industry in British Columbia that I thought was low hanging fruit,” says Wilson. “It could be administered through BC Transit; the money could flow from the Ministry of Transportation to BC transit.”

There is precedent for such a package, similar to what was delivered for the Highway of Tears. They’ve also proposed a per-bus subsidy and an option to insure buses per-use.

Harbour Air’s president Randy Write issued Douglas a statement responding to the situation: “The Covid-19 pandemic has devastated company revenues at a pace that simple staff reductions and restructuring could not compete with, all while still trying to service the essential travel requirements of the Province. The fixed costs, health and safety obligations and other non-negotiable expenses require a team of over 149 employees and thereby excludes companies like Harbour Air from the $300 million BC Business Recovery Grant program. Help must be given to companies like Harbour Air. These companies are falling through the cracks but are some of the biggest employers and thus the biggest contributors to the economy of British Columbia.”

One size doesn’t fit all

The year has seen governments speed up in their ability to put change into action, but the transportation sector, and policies pertaining to it, has been let down by the pace of conversations and by the generalization of policies: a one-size fits all recovery strategy doesn’t reflect the nuances of operating costs due to size, scale and service.

Wilson believes that a complete ground transportation sector package is not the best way to go about this. The sectors within motorcoach are vastly different. “We’re in most of them,” says Wilson. “School bus, sightseeing, intercity, shuttle, and charter are all a different beast. … We just happen to be in them all because we’re one of the larger companies in BC. Most bus companies, and most ground transportation companies, are in one, sometimes two, but certainly not five or six like we are.”

Those services can’t be switched off and on like a light; with millions worth of infrastructure on the line, it might be hard to get back to where they were pre-pandemic.

“If nothing happens, Wilson’s will survive,” says Wilson. “But what it will look like a year from now would be a much smaller company with much less capacity.” Wilson sees a contraction affecting sports, community and tourism, amongst others. “I know people think, that’s okay, someone else will come in. No, they won’t: I guarantee you, they won’t come in.”

The companies who are still standing are the ones who were financially stable before the pandemic. “We’ve been running on our savings accounts,” says Wilson, “twelve months in now and those contingency funds are drying up.” That leaves the question, how long is a shrewd business going to keep pouring its money into an unstable company?

Last Wednesday (February 10, 2021) Trudeau announced that the federal government will spend $15 billion on public transit projects over the next eight years. The funding will focus on major projects and infrastructure, taking into account Canada’s commitment to reduce GHG emissions by 30% by 2030. Hopefully the unique challenges faced connecting remote Canadian communities will be a priority alongside the obvious changes to urban centres.

The Douglas profile of the Wilson family’s challenges and triumphs 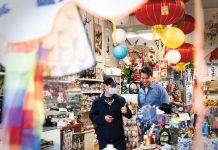