In Canada, membership to the Professional Disk Golf Association grew 30 per cent in 2020 and 75 per cent in 2021. The country ranks about third globally for the number of courses.

“People are shocked by how big disc golf is and how it’s growing,” says Eve Olynyk, a UVic commerce grad who has played the low-cost, family-oriented sport for several years.

Olynyk and Simon Park are cofounders of MeepMeep (name is based on the Road Runner’s beep beep call), a Victoria company that produces smart disc golf accessories.

The genesis of MeepMeep was Olynyk’s frustration over precious lost time spent hunting for a disc on a course that, on Vancouver Island, is often in the forest.

With traditional golf, if a ball is lost, the player has more in the bag. With disc golf, the disc is both the club and the ball.

“It hurts a lot more losing them,” says Olynyk.

When Olynyk was introduced to Park, a graduate of mechanical engineering, through UVic’s Innovation Centre, his participation became game changing.

“We really thought through the entire user experience,” says Park.

Initially, the tracker/locator was duct-taped onto the back of the disc to see if the tracker worked and did not dislodge.

“A big part of our technology is our adhesive tape,” says Park. “We spent a year testing different options.”

Rigorous trials included chucking disks at concrete walls, throwing them during heat waves and putting them in a freezer. Eventually, a successful adhesive was developed that will keep the seven-gram MeepMeep tracker in place and not impact the 150-gram disc’s trajectory.

Prototyping the plastic, shock-absorbent tracker casing was a community affair, with many partners helping out. As well, MeepMeep has made it a priority to make the iOS and Android apps, developed by Park and his team, accessible for the vision-impaired.

Following a very successful pre-order campaign, MeepMeep is in final negotiations with manufacturers. Thousands of customers are waiting for a MeepMeep tracker. 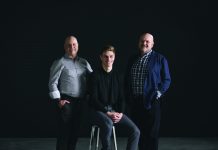